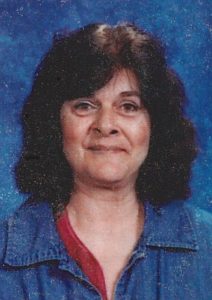 Linda loved kids! She volunteered at Sheridan Road School for years and then after her own kids were grown worked as a lunch aide at Gier Park Elementary School.  She also worked as a candy striper at St. Lawrence Hospital.

Linda was an avid gardener, especially growing flowers and was an animal lover.  She was involved in numerous ADHD groups and was active with many social groups on social media.

A memorial service will be held at 12:00 p.m. on Tuesday, January 14, 2020 at the Estes-Leadley Greater Lansing Chapel.  The family will receive friends at the funeral home on Monday from 2-4 and 6-8 p.m. and again on Tuesday for one hour prior to the service.

Those who wish may make memorial contribution, in loving memory of Linda, to the American Cancer Society.

My thoughts are with the Tucker family during this difficult time. Linda was a kind and gentle woman. I got to know her at Sheridan Road School when I had her grandson, Jacob, in my 5th grade class. I will miss seeing pictures of her beautiful flowers and chatting with her on FB!

Linda may you R.I.H. I remember growing up on Creston Ave all of my life and you were right down the street! You will be dearly missed! May the Lord Jesus Christ Bless You and your family! AMEN.

Dearest Linda, thank you for being my wonderful, dear friend. I’m going to miss you terribly. You always had time to listen and help me through difficult times. You made me laugh all the time, too. We became friends on the ADHD site 20 years ago. Love you, girlfriend.

Dearest Linda, may you rest in piece. I loved your garden pictures and envied the green thump you had. We got to know each other through ADHD-supportgroup, you were an amazing support and a dear friend. My sincierest condolences to the whole family!

Linda, I’m going to miss our small talks, your great humor and our mutual love for cats. It was always my wish to actually meet you in person and am now heart broken that it never happened. I will keep your family in my prayers. May you RIP my sweet friend.

Linda I am so so sad you have left us but may you RIP. We became friends on the adhd support site back in the early 00’s and went on to jointly administrate that amazing site along with our fabulous moderators. Since then our friendship has continued on Facebook and your bright and uplifting good morning messages have become part of life and will be SO missed now. Sleep well.

Linda you are family but really got to know you when Jacob and Junior were in school together!! You helped me so much with juniors adhd!! I loved your flowers and all our sweet talks!! You will be greatly missed I love you!! Prayers to the family for comfort!! May you rest in heaven sweet lady!!!

Linda I always considered you my Sister. I loved our Morning talks on FB, You we’re always so caring,funny and honest. Your tell it like it is something I always admired. Praying for Paul and your Family. RIH . Love you, Karen

I’m so proud to be related to Linda, what a beautiful soul. Rest in piece sweet cousin….

My prayers go out to Linda’s family. I’ve known Linda most of my life. I will miss your lovely posts and your humor. You always responded with grace in the face of adversity, but as a true Italian you took no BS. I know you touched the lives of so many kids both at Gier and Sheridan road. Including my own daughter. You will be missed. RIH

So sorry for the family. Thoughts go to the whole family. I am Uncle Sam daughter.sue rose fountain