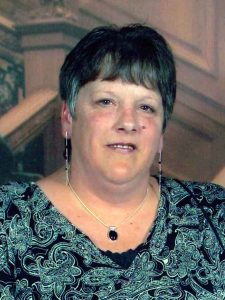 Age 64, of Grand Ledge, MI, passed away August 29, 2019, after a brief but brave battle with throat cancer.  She was born September 27, 1954, in Lansing.  Linda graduated from Holt High School in 1974.  She enjoyed traveling, cooking, watching movies, and spending time with her grandchildren.

The funeral service will be held at 12:00 p.m. Wednesday, September 4, 2019, at St. Stephen Lutheran Church, 2900 N. Waverly Rd., Lansing.  Her family will receive friends at the church from 11:00 a.m. until service time on Wednesday.  Online condolences may be left for her family at www.EstesLeadley.com.

Christy, Pat and Steven I am so sorry for your loss. I always remember your Mom’s sense of humor, she like to laugh. Bob Snyder

We want to share our most heartfelt condolences to the whole family. Linda was such a character. She always had a hug for me and I remember laughing whenever she was around. She was one who we’ll all remember fondly and with a grin. 🙂 I’m so very grateful she didn’t suffer long. She was good people. Big hugs to the whole family, but most especially Steven, my brother from another mother. We’ll be at the memorial with you in spirit. All our love, Nick and Joan Jenkins