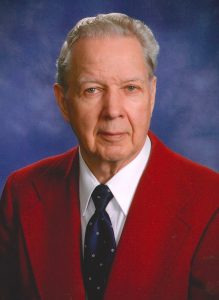 Age 85, of Mason, MI, went to be with his Lord and Savior January 23, 2023. He was born March 10, 1937, in Mason, MI to Glen and Esther (Kennedy) Holmes.  As a teenager he accepted God’s free gift of eternal life through faith in Jesus’ substitutionary sacrifice.  He served many years as a deacon and treasurer at Columbia Road Baptist Church.  In later years at South Church, he served as a driver for seniors’ events and special needs transportation.

Leroy graduated from Mason High School where he played tuba in the marching band. While in high school he worked in Oldsmobile’s forge plant and later completed an apprenticeship as a die maker. He earned an Associate Degree in accounting from Lansing Community College and retired in 1992 from the State of Michigan as an auditor.

Time with family was a priority for Leroy who made sure family vacations were spent traveling through the United States to see and appreciate God’s creation. At home he would initiate playing games and solving puzzles. He, along with his wife, attended their children’s countless sporting and band events. After retiring, he and Lois undertook many homestead improvement projects. He also enthusiastically enjoyed researching his genealogy.

To live stream the funeral service go to www.southlife.org/funeral.

In lieu of flowers, donations can be made to the City Rescue Mission of Lansing.

Thinking of and praying for the Holmes family.

I have known Leroy since I was seven. Our whole family came to know Jesus because of this man’s testimony. I am so thankful for this man being a part of my life and the wonderful man of God he was. Angelia Dalman

I worked with Leroy for many years, and admired his ability, steady reliability and quiet humor; he was a valued member of our team. It was an honor and a pleasure to know him as a coworker and friend.

I have known Leroy from back in our high school days where we both marched in the high school band at many football games and several Memorial day parades. He was a very nice and friendly young man and a darned good tuba player.

Leroy was a highly principled and faithful servant of Christ and His church.

John 11:25-26
Jesus said unto her, “I am the resurrection and the Life. He that believeth in Me, though he were dead, yet shall he live; [26] and whosoever liveth and believeth in Me shall never die. Believest thou this?”

We Love you Aunt Julie, and family. You have, and will be in our thoughts and prayers.

thoughts and prayers to the entire family .

I KNEW LEROY FROM CR BAPTIST CHURCH AND AS A SKILLED TRADES SUPERVISOR AT OLDS PRESS ROOM. I’VE MET VERY FEW MEN WHO HAD THE INTEGRITY OF THIS MAN. ALSO ADMIRED HIS CALMNESS AND WRY HUMOR. HE WAS A GREAT EXAMPLE TO HUSBANDS AND FATHERS EVERYWHERE. SURELY THE WORLD IS DIMINISHED BY HIS PASSING.