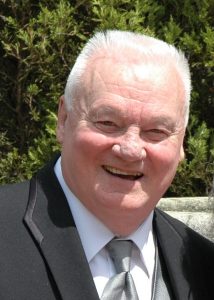 Age 86, of Lansing, MI, passed away peacefully in his sleep, after a long battle with cancer, on June 5, 2021.  He was born June 30, 1934, in Indianapolis, IN.  Kenton graduated from Cathedral High School, then Butler University in 1956.  He was president of Holt Equipment Company, retiring in 1999.  Kenton was a very generous man who enjoyed spending time with his family and friends.  He was a member of the Crystal Bar Coffee Club and the card club.  He was an avid football fan, holding season tickets for Detroit Lions for over 40 years.  Kenton and his wife traveled extensively, including all continents.  He also enjoyed spending time at the cabin in Brown County, IN.

Kenton’s family will receive friends at the Estes-Leadley Holt/Delhi Chapel from 4:00 p.m. Wednesday, June 9, 2021, ending with a brief funeral service at 7:30 p.m.   Burial will take place at 1:30 Thursday, in St. Joseph Catholic Cemetery in Indianapolis.  In lieu of flowers, memorial contributions may be made to St. Jude Children’s Research Hospital in memory of Kenton Rawlinson.  Online condolences may be left for his family at www.EstesLeadley.com.

I’m sorry for your and our great loss.

I had the pleasure of knowing Big K through my dad who worked with him. He was always so funny and full of life. Rest in peace Big K. I will keep your family in my prayers.

Janice my prayers are with you and your family so sorry for your loss i know for one how it is.God Bless Bonnie let me know when you will be home

I am sorry for your loss. I always enjoyed when uncle Kenny would come and visit. He always had a good story and a joke or two.

Janice I am so sorry for your loss of a great guy. My prayers are with you and family. Hope to see you at our next cardiac rehab luncheon at the park. Hugs!!!!

Gonna miss that laugh Big K. Appreciate the time we’ve spent together. From poker, to chick fil a lunches, to Lions games. Thanks for it all. RIP my friend.

Janice, belated condolences. It was a great pleasure working with you and Kenny over the many years I was with J I Case.

Janice I offer my heartfelt condolences to you and your family. Big K was larger than life and a joy to be around. He was one of the most generous persons I have ever met. He will be sorely missed. Rest In Peace Kenton Rawlinson.

So sorry to hear this Janice. Wish we would have known, we for sure would have been to the funeral home. So many great memories. Prayers to your family.