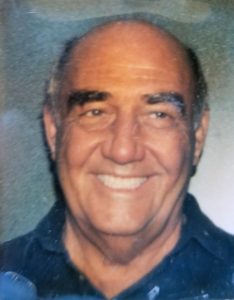 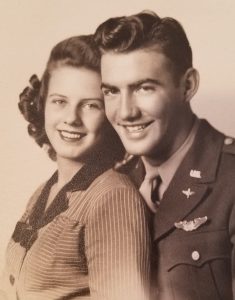 Ken graduated from Everett High School in 1942, after lettering in football for four years, as the quarterback. He joined the army, and was sent to pilot school, before shipping overseas to fight in WWII. He married Arlene before he left. He was honorably discharged in 1945 and returned home to start raising a family. He worked at Coca-Cola and Oldsmobile before joining the Demmer Corporation in 1951, where he worked until his retirement in 1987.

Ken and Arlene both enjoyed traveling the United States and going to the family cottage at Houghton Lake. They were both loved deeply by all who knew them, and they will be dearly missed.

No services will be held at this time due to the Covid-19 pandemic. Arrangements are by the Estes-Leadley Holt/Delhi Chapel.

What a wonderful guy, I remember that smile from when I was just a little kid and when I stopped and visited him a couple of years ago it hadn’t changed a bit and he remembered who I was! I haven’t seen you guys in years but I’ll never forget some great times with the Henrys at the cottage and the house. God bless you all as you mourn the loss of your father!

He showed me how to throw a horseshoe. He took me fishing. He said always attach the stringer of walleyes to the boat before you toss it over the side. He drank beer with my dad. He told us naughty jokes. He made me laugh. A lot. He exemplified dignity. He was a role model. And he leaves me with the fondest and enduring memories a nephew could ever ask for. Thank you so very much Uncle Ken. God bless.