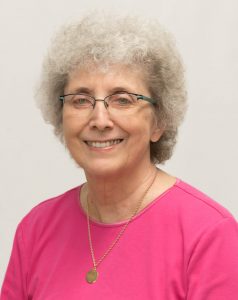 Karen was born on June 22, 1937, in Lansing, Michigan, to the late Albert and Ester (Vuori) Berg. She was a 1955 graduate of J.W. Sexton High School and went on to complete two years of studies at Michigan State University.

Karen and Phil were married on May 17, 1958, at Grace Lutheran Church in Lansing, where she was a faithful member for many years. She subsequently joined Phil in Huntsville, Alabama, for one year while he completed his service in the US Army. Upon returning to Lansing from Huntsville, Karen worked at the Michigan State University College of Education, supporting Phil while he completed his Master’s degree in Mathematics.

In the following years, Karen focused on raising her family and doing freelance writing—or “playing with words” as she often described it. She eventually returned to Michigan State University on a part-time basis and completed her Bachelor of Arts degree in Journalism in 1977.

In recognition of her career accomplishments, Karen was named J.W. Sexton High School’s 1990 alumnus of the year, and was thrilled to give the commencement address to the graduating class that same year.

She was an active member of the Lansing community throughout her life. When her children were young, she served with many volunteer organizations including Brownies, Girls Scouts, Reading is Fundamental (RIF) and the PTA. She also volunteered for Sparrow Hospital at the Information Desk and in the Emergency Room.

As the daughter of a Swedish father and Finnish mother, Karen was extremely proud of her heritage. She was a member of the Greater Lansing Scandinavian Society and she wrote and published a Scandinavian cookbook called “Coffee with Mama,” which sold several hundred copies.

Additionally, music was very important to Karen. When she was young, she played the piano, sometimes accompanying her father’s violin performances. She also sang in the MSU Women’s Glee Club, and in her retirement, she participated in the local “Social Security Scandals” variety shows for several years.

Karen enjoyed traveling with Phil, and they visited many different places throughout the United States and Canada. They also made several trips to Sweden and Finland, enjoying their time with Karen’s relatives.

Karen was predeceased by her parents, her sister, Anita (Bob) Horwood and her in-laws, Maclin and Constance Douglas. She is survived by her devoted and adoring husband, Phil, and her two loving daughters, Wendy (Scott) Bates of Stanton, Michigan, and Lisa (Robert) Rossi of Oakville, Ontario. She will be greatly missed by her much-loved grandchildren, Lexi (Shawn) Quirin of Frankenmuth, Michigan, Morgan Bates, Aaron Bates and Dylan Bates, all of Stanton, Michigan, Matthew Rossi of Hamilton, Ontario, and Erika Rossi of Kelowna, British Columbia.

She is also survived by nieces Kristine (Roger) Malkowski, Kathy (Joseph) Mohr, nephew Steven (Ginger) Benson and many cousins in Sweden and Finland.

The funeral service will be held at 11:00 a.m. Saturday, November 23, 2019, at Grace Lutheran Church, 528 N. Martin Luther King Jr. Blvd., Lansing, MI 48915, with Pastor John Schleicher officiating. Interment will follow in Deepdale Memorial Gardens, Lansing. Karen’s family will receive friends on Friday from 1:30-4:30 p.m. at the Estes-Leadley Greater Lansing Chapel, and also one hour prior to the service at the church on Saturday. In lieu of flowers, donations can be made to Grace Lutheran Church or the Alzheimer’s Association (Capital Area Regional Office) in Karen’s memory.

Upon her passing, one of Karen’s friends described her as a “good soul,” which eloquently summarizes her well-lived life as a wife, mother, grandmother and friend.

Karen was the epitome of the phrase “a good soul.” She made us smile. Dear God, we’ve lost one of those people who make us forget our differences — who reminds us of all the good we share in common. I am blessed to have known her, and surely so have countless others.

I couldn’t agree with Mark more. She was so accessible to me as an advertising/community rep and was such a great partner when communicating with the community. Just thinking about her… so missed and sorry she left us, already…

Karen was the best — it takes a lot to pull off professional and mothering in a classy way. Karen proved you could care for co-workers, that the workplace didn’t have to be an impersonal place. And readers loved her, too. She has given those of us lucky enough to work with her a bar to reach. But she never did convince me of the charms of lutefisk. Accept a hug of condolence, Phil.

So sorry for your loss…

Wendy
Thinking of you and sending a warm hug.
Charissa

Sending love and deepest sympathy to Karen’s family. She was beautiful, glad to have met her through Anita. With love, from Aunt Kathy and Uncle Jeff Horwood

We are so sorry for your loss.

Our deepest sympathy to you and your family.
Mark Soave & Jenifer Moore

Karen has been my friend since I first met her when she was on a date with Phil 62 (? years ago. I was the Best Man at their wedding. I drove from Columbus, Ohio in my 1932 Plymouth. I arrived just on time after changing a flat tire. I lost the soul on my shoe and when we kneeled down for a prayer, my soul-less shoe was discovered. There were many good times celebrated together throughout the years. One of the last times we were together again was on our yearly visits to the Tomato Brothers Restaurant. We also celebrated our 50th Eastern High School Reunion together. Karen was quite a reporter with wonderful English Skills. Karen was a kind, generous, beautiful human being who was very proud of her Finnish heritage. I shall miss my dear friend, but she left me with many happy memories. Gerry

We’re so sorry for your loss. The love you have for a Mom and Grandma is a special one that you’ll always treasure.

Your mother will continue to be with you because she will always have that special place in your heart. She is your angel in heaven.

Dear Lisa;
My condolences to you and your family. Such a sad day and hope time with your family will be a comfort. Thinking of you.
Louanne

Dear Phil,
We are so sorry to learn of your loss. Know that you and your family are in our thoughts and prayers at this difficult time.