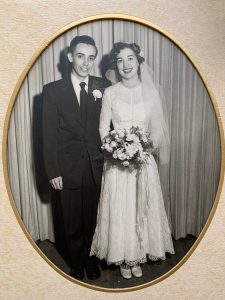 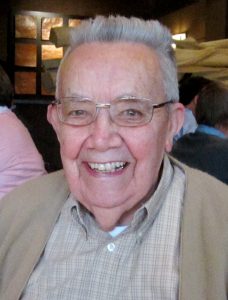 Joe was a Veteran of WWII, landing on Omaha Beach two days after D-Day.  His 430th AAA/AWBn went across France into Belgium (Battle of the Bulge) and into Holland, then Germany.  The war in ETO ended on his birthday, May 7th.  Joe worked for the County of Wayne and the State of Michigan Department of Social Services in Detroit.  He retired in 1980.  In 1987, he and his wife moved to Lansing to be closer to their daughter.  He was an avid fan of MSU basketball and football and served his Lansing Township Community on the Board of Review for ten years.

No services will be held at this time.

So sorry to hear this. Joe and Reba were one of my favorite couples to attend the Lansing Community College Adaptive Rehabilitation class for many years. Always cheerful and positive. He was devoted to Reba and it showed. Really going to miss him. Joe was an inspiration to all married couples.

We are so sorry to hear about Joe’s passing. Joe and Reba were among my favorite people at our class at Lansing Community College, and Bill and I will keep Reba and the family in our thoughts and prayers. Our hearts grieve along with you all. May Joe rest in well-earned peace. Love to you, Reba, from both Bill and me.

I will miss the little chit chat time I had with Joe if Reba was out and about. He always had a wonderful story to tell. When Joe and Reba were together you could still see the sparkle in their eyes. Rest in peace dear man. Reba you have many friends and family lining up for air hugs. Hope to see you soon. Joan