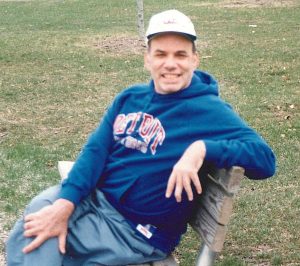 Joe was born 69 years ago at Mt. Carmel Hospital in Detroit. Upon entering kindergarten it was clear he would not be able to handle classroom demands. This occurred before special education existed. Joe entered Detroit’s Lafayette Clinic from kindergarten. He transferred to other state hospitals until he was 19 and released to an adult foster home in Detroit. He spent 10 years in the city before moving to Hillsdale County. Joe presented challenges to care providers and health care professionals. He returned to a series of state hospitals until he moved to a CMH adult foster home in Ingham County. He lived at his final home, Pleasant View AFC, for the last 15 years of his life.

Joe was a great fan of Pistons Basketball, specifically, and NBA Basketball, generally. He enjoyed games on TV and at Cobo Hall, the Palace at Auburn Hills, and Little Caesar’s Arena in Detroit. He was also a fan of Elvis and rock and roll. Joe would sing and dance at the drop of a familiar note of a favorite song. In 2005 Joe took his first plane ride to Memphis and Graceland. He also went to Cleveland and the Rock and Roll Hall of Fame.

Joe loved numbers, arithmetic and facts. He could tell you the number of half seconds in a century, capitals of every U.S. state, and facts about U.S. presidents. Joe visited the Gerald R. Ford Museum in Grand Rapids. Because of his interest in presidents he was encouraged to vote. He demurred saying he did not know enough. He was told that he was eligible to vote if he was 18 and not in prison. Joe voted in the last three presidential elections.

When Joe talked, it was difficult to follow his train of thought. He would answer questions with reference to unrelated ideas. This puzzled all listeners. After he lived in Lansing for a couple of years he said he didn’t know the meaning of some words. His sister realized he did not know the meaning of many words. They began looking up the meaning of words and Joe’s ability to communicate improved greatly.

Joe was never able to work, marry, serve his country or live on his own. But he loved his family and took great delight in life milestones. He was safe, comfortable and happy at his AFC. In recent months he passed up watching some Pistons games with his sister in favor of staying home with the “girls” at his house. He will be missed.

In lieu of flowers, memorial contributions may be made to National Alliance on Mental Illness – State Chapter in Lansing in memory of Joe Stanyar. NAMI Lansing, P.O. Box 26101, Lansing, MI 48909.

He was such a delight to care for..he put a smile on all our faces ..I for one enjoyed listening to him ramble on about our history and I use to ask him often about different presidents and then hurry to my phone to see if he was right and 9 out of 10 times he was…he will be missed by us all

Sorry to hear about Joseph. I never met him but I heard your Dad talk about him.
I am his cousin from Ontario my Dad was Dan