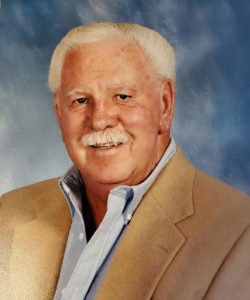 John Clayton “Jack” Kinne was born August 26, 1935 in Gladwin, MI and passed away on September 30th, 2021 in Lansing, MI. He always wondered what’s to stop a person from just leaving without paying the bill, and now he knows. John is survived by his 4 children, 7 grandchildren and 8 great-grandchildren, but everyone knew who the favorites were.

He was fond of a few too many of whatever he was having, and never complained about too much of a good thing, even if it meant he had to “whiz like a racehorse.” When not owning a goat that ate the foam out of car seats, he was charming his way onto the army volleyball team to travel around Europe, or doing his best MacGyver impression to fix something. John was drafted while a dental student and returned to college to study birds of prey, neither of which he ever did as a career. He did teach a little school, sell a lot of cars, build many things, mow any grass he could find, and make a few people laugh along the way.

John caught less fish than he claimed, shot more deer than he admitted, and taught a whole generation the proper way to make a dirty martini. He told anyone who would listen that he was allergic to women, and after a couple three ex-wives, in the end he was probably right.

John may have been short in height but was a giant in personality, with an affinity for tall tales, and was always glad you got to see him. Everything you just read may or may not be true but that’s what I heard. In lieu of flowers, memorial donations can be made to the American Cancer Society or Alzheimer’s Association.

I am sorry for your loss. You’re in my thoughts. Yes, John was always glad you got to see him.