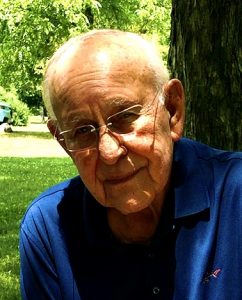 From The Family:
With sadness and heavy hearts, we share the passing of John Hueni, our father, grandfather,
great grandfather, brother and uncle.
He was born August 18th,1930 to John and Kathryn and was brother to Margaret, Mary, Maria
Elise and Daniel.
He liked it short and sweet. No details, facts only. He was a mensch. He was a smooth operator.
He was a lover of golf. He was a news junkie. The word dapper best describes his sense of
style (he leaves behind 42 pairs of khakis, 52 golf shirts and 37 sweaters). Gardening was his
passion. He was a voracious reader.
John’s life revolved around family, food, friends and football. An olive burger at Kewpee or a
royal feast at Sir Pizza, followed by a hot fudge sundae, left him a very happy man-especially
when joined by family and friends. He seldom missed a Michigan State University football game.
For many years he had season tickets. More of a showman than a star athlete, he loved and
played football at Sexton High School where he graduated before attending MSU. He was a
lifelong State of Michigan employee, ending his career as State Personnel Director. His longest
friendships were with people he met at work.
He had a long and loving marriage with Jane who left us too soon. He was an amazing father to
John III (deceased),Traci (Paul), David (Steven), Tim, Jennifer, Chris (Annette) and Rachel
(Som). He doted on his grandchildren: John IV, Andrew (Becca) Jessica, Lindsey (Neptaly) and
Zachary to the envy of their parents. The great grandchildren, Jordyn and Virgina Jane, sadly
won’t have years of Papa but what time they did spend with him will be treasured by all. He was
a loving mentor to nieces and nephews, always there when needed as the mature and nurturing
uncle/friend.
There is a level of comfort knowing that your parents are there for you. No matter how tough life
can be, a parent acts as your head cheerleader and protector. While John may be gone from
our lives physically, his memory lives on, guiding and comforting us. Life is a cycle. He is gone
but lives on through us.
John chose not to have a funeral. His preference was that people who cared should go out and
share an act of kindness with someone less fortunate or make a donation to a favorite charity in
his honor. Life is short, make a difference.

Rest in Peace, old schoolchum John, we have known each other for a long, long time . You will be sorely missed …….. Milton Foster

Thanks John for being a great boss and a great friend.
Bill Blackburn

He was truly a wonderful man and boss. John was one of those very few that you felt you could have the the honest and difficult discussions with, without being judged. He was a great model for how to effectively manage people and situations. He left a wonderful legacy.

John hired me into my career job many years ago. I was so immediately impressed by him the very first time meeting him. He was a model of professionalism and kind demeanor. I will only have kind memories of this wonderful boss.

I go back to our days at Sears Roebuck. We then met again in State Government where he audited my desk (to a higher level). Every word the previous person wrote is so true.

He was the best of the best. His dry sense of humor ever present.

What a wonderful person!!

John Hueni was the finest and most respected Personnel Director the Secretary of State ever had. We were privileged to have him for a brief period. A kind, trustworthy man who was outstanding in his field.

You were my dad for 25 years longer than my dad was my dad.
Love you John

I’ve known John since Verlinden Elementary School. We both lived on N. Genesee Dr., in Lansing, attended Sexton H.S., where John was very active in sports and a very popular classmate. I always looked forward to seeing him at class reunions. His friendship will be long remembered. My sympathy goes to his family. in fond remembrance, Joan (Beilfuss) Walters, Huntley, Illinois

So sorry to lose a 1948 Sexton classmate. Happy memories of Latin class, hayrides, and many class reunions. He will be missed by many. Ann (Keefer) Page