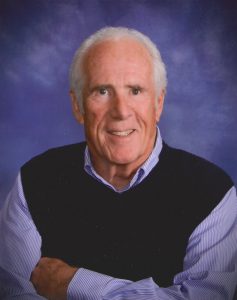 After high school he attended Ferris State College. He enlisted in the U.S. Army where he served as a paratrooper in the 82nd Airborne Division. Upon return, he married his high school sweetheart and devoted wife of 56 years, Sharon, who survives.

He joined Michigan State Police from Paw Paw in July 1965 (Recruit School #58) and served at Erie, New Buffalo, Governor’s Security Detail,  Special Operations & Homeland Security, attended the FBI National Academy, and retired as Sp/Lt in October, 2010.   At the time of his retirement, he was the longest serving enlisted member of MSP, at 45 years, 3 months and 24 days.

JB’s faith in Christ was exemplified through his patience, humility, and unconditional love for his family and co-workers. He provided consistent guidance, teaching them to be thoughtful, kind, respectful, logical and thorough in their approach. He rarely missed an opportunity to play a prank or a joke.

He and Sharon have four children of whom he was so proud and survived being PKs (policeman’s kids):  Jay (Amy) Allaire, Carey Allaire, Jill (Brad) Donaldson, and Erin (Jake) Allaire.  He especially delighted in his seven grandchildren: Roland, Eli, Sierra, Cale, Spencer, Julian, and Stella. He and Sharon attended as many of their sporting events, concerts and activities as possible. He also loved teaching them many skills like how to wash the car or run the lawn tractor  AND clean up afterwards.

He was preceded in death by his father J.W. “Doc” Allaire, his mother, Laura M. Cone, brother Ronald Allaire, his sister-in-law Linda Cramer, and in-laws, Jerry and Irene Cramer.

JB indicated he did not want to spend Thanksgiving at home this year, but rather in heaven. He told us all “the best is yet to come’.

The family strongly requests that all attending visitation and the memorial service please wear a mask.

We are so sorry for your loss.

I was saddened to hear about Jerry’s passing. He was a great man and coworker. He will be sadly missed. A true legend with MSP. RIP my friend.

The Ericks family extend their condolences at Jerry’s passing. He was one of the kindest men you would ever meet. So very sorry for your loss.

I will always remember his tone of voice when he called me out for dog calls. “Operation, Allaire! Do the Loader children need some new shoes?
I’ve got a dog call for you.” His sense of humor and overall MSP knowledge was second to none. It truly was an honor and a pleasure to know and work with you Jerry! Our thoughts and prayers for you, your family, and many friends. Godspeed my friend. May you rest in peace in the arms of the Lord!

It was a great joy for me to have known J.B .We worked together while we were both in the service of Governor Milliken He was a person of integrity and great skill In the past few years a group from the same experience met together for lunch on occasion and he was always of good humor, very kind and thoughtful. He added to my life and many others.
Fred Grasman

Prayers and condolences for his family and friends. Mr. Allaire was my family’s Elder when we attended St. Matthew Lutheran Church in Holt. He was a kind and loving man.

What a tremendous loss. We hope you are able to find some measure of comfort and peace in the happy memories of your dear father. He sounds like a gem.

Thank you so much, Amy, Stan, Augie, Liv, Rose and Luke. Great to have you in my support “net”.

I will always remember our family pizza nights and many other memories of spending time growing up with your family. Jerry was such a kind man. I know his Thanksgiving dinner in Heaven was unimaginable. Praying for your whole family.

Jerry it was an honor serving with you, you always knew what the heartbeat of the
State and of MSP was. I pray that the Good Lord is holding you and your family close.

If everybody on earth could have been a replica of Jerry Allaire, the world would be a far better place … RIP MSP Hero Jerry!

Oh my goodness, I am very sad at finding outbid your husband and dad’s passing. I will remember all our talks and also, these past few years of seeing your grandchildren and mine in school activities, here in Okemos! Jerry, go fly with the angels and Jesus. You will be missed!

Dear Jerry, God probably has you organizing the missions of His angels. Every time I needed the lab, or K-9s, or whatever for my troops, I always felt reassured that you would get us what we needed. You were one of the kindest souls I knew in the Department. Bless you and your family. Rest well, Jerry. You took care of so many in the MSP.
Sandy Miller, F/Lt. Retired

Sorry to hear that your dad is done with his earthly life but so glad he can begin the lasting one with his Heavenly Father. I didn’t know him well, just that he was your dad that I’d see enjoying his time at camp with his family. He had that police officer look that made me try to be extra respectful when I was around him. He must’ve been a wonderful dad because all of his kids turned out really great. Peace to you all as you settle into this phase of your lives without him but knowing you WILL see him again.

We so remember Jerry, always a smile on his face. Sharon, I remember our & yours going through Our Savior Luth. School together, so many memories. Jerry is in our Heavenly Father, such a beautiful thought & we will be all united again. May God bless & keep all you Allaires!

The Sears Family would like to extend our condolences to your family for your great loss. We knew him from St. Matthew Lutheran Church.

Fond memories of times together at Camp Arcadia. Jerry was a role model for other dads and volunteers. A great man in all the ways already described. May your hearts be healed as you grieve. Love and hugs.

Thank you, Tom and June

To Sharon and the Allaire family, I am truly sorry for your loss. Jerry was always a man that I admired in the MSP. From reading his name on documents from Headquarters as a young trooper to getting the chance to work by his side as an Operations Lieutenant, there was never a time he wasn’t mentoring and giving us a historical perspective. May he be at peace and forever in the arms of our father.