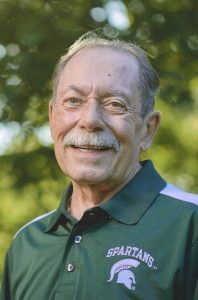 Jeff was born September 23, 1946, in Detroit, Michigan, to Lee and Dorothy Hetrick.  The family moved from Highland Park to Ferndale when Jeff was 2 years old.

After graduating from Ferndale High School in 1964, he became a U.S. Navy Corpsman serving in Vietnam, stationed on the USS Vancouver.  Upon discharge, Jeff worked in a microbiology lab at the Upjohn Company in Kalamazoo, all while getting married and starting his family.

While attending Ferris State University, he was an ambulance driver for Mecosta County and worked at Reed City Hospital.  He graduated in the first EMT class approved by the State of Michigan. He graduated from Ferris State University School of Pharmacy in 1975.  He worked in community and hospital Pharmacy, including three years as assistant director of Pharmacy at Ingham Medical Center, Lansing and eight years as staff Pharmacist at Foote Hospital, Jackson.

He would work part-time at Neubrecht’s Pharmacy in Mason to help his friend, Franz Neubrecht, to have some needed time off!

While working for Meijer, Jeff became manager of the South Pennsylvania Pharmacy in 1987, later the Pharmacy manager of the new DeWitt Meijer Pharmacy in 2007.  Jeff semi-retired in October 2009 and then returning to Foote Hospital (Allegiance Hospital) in Jackson until fully retiring in 2016.

Jeff loved sports.  In his youth he played hockey and baseball.  He was a member of the Construction Golf League in Mason with his longtime golf partner, Ron Underhill, also a member of the Mason Business and Professional Golf League with golf partner Mike Thompson. After retirement, He golfed on Thursday mornings with Ron Underhill, Dave Kocsis and Ken Gessner.  He would meet for breakfast with the “Tuesday Bunch” (Jeff, Tom VanStratan, Scott Gearhart, Jerry Cizauskas, and Ron Yuhasz) often followed by bowling, with lots of fellowship and laughs.

Jeff was a member of the American Legion, supporter of the USO and the Wounded Warriors Project.  He loved to travel, often helping Sharon with her travel business.

Jeff is blessed with a wonderful family.  Matt and Rebekah, Sean and Denice. Grandchildren: Gabe, Lexi, Henry and Grace.

Jeff met Sharon in 1979 and they married October 3, 1980, blending their families to include Sharon’s 2 boys, Christopher and Matthew and Jeff’s boys Matt and Sean.

He is preceded in death by his parents and step-sons Matthew and Christopher.  He leaves to cherish his memory – his loving and devoted wife for 39 years, Sharon; Sons: Matt (Rebekah) and Sean (Denice); Grandsons: Gabe and Henry; Granddaughters: Lexi and Grace; and Brothers: Richard (Mary) and Lee.

Many Special Friends: Tom and Brenda, Ron and Dottie, Mike and Sharon, Doug and Jane, Franz and Joan, and so many others including nieces and grandnieces and nephews.

The family wishes to express our appreciation and gratitude to the many friends and family for their loving acts of kindness shown with the passing of our loved one and respecting our need for privacy.  Your compassion and thoughtfulness will be forever cherished.

Funeral services will be held at 2:00 p.m. on Friday, September 13, 2019 at Our Savior Lutheran Church, 7910 E. St. Joseph Hwy., Lansing, with Pastor Bill Wangelin officiating.  The family will receive friends at the Church on Friday from 12:30 p.m. until service time at 2:00.  Interment and military honors will take place on Saturday, September, 14 at 2:00 p.m. at White Chapel Cemetery in Troy, Michigan.

Dear Sharon,
Marcia & I want to express our condolences. It is so hard to lose our loved ones. Jeff will be waiting for you in Heaven. May he rest in peace.

Dear Matt and Sean,
Condolences and prayers to you and your families. Enjoy the memories you have of your dad they will keep him close to you in your heart.
Thoughts and prayers,
Eileen and family

Thank you Eileen. It was great seeing you Saturday!

Dear Sharon and Family,
I am so sorry for your loss. Jeff and all of you will be in my prayers.

Sharon and family,
Donna and I are so sorry to learn of your loss. You and Jeff were long time friends when you and Donna worked together at Dancer’s Fashions.
Prayers for You, Jeff and all of the family.
Love,
Joe & Donna Warren, Leslie, MI.

God’s peace to the family of Jeff Hetrick. I was saddened to hear of Jeff’s passing. I understand he knew Jesus and shared Jesus with others. Well done good and faithful servant of the Lord! Your Our Savior Church Family is ready to love and support you in the coming times. We place our hope and trust in the Lord.

All my love and prayers for Sharon and family. I always enjoyed getting to know Jeff on some of our bus trips. May God give you peace as he wraps you in his arms. Always be blessed by your memories and the knowledge that you will see him again!

Sharon, We were so sorry to hear of Jeff’s passing. Sending our deepest sympathies and prayers for your comfort. Sam and Tove