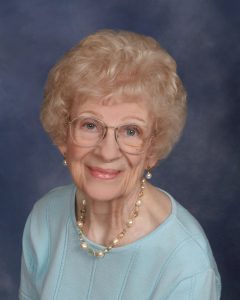 Age 93, of East Lansing, MI, died March 4, 2019. She was born November 18, 1925, in East Lansing, to Ralph H. and Florence Young. She grew up in East Lansing and graduated from East Lansing High School. She married Marshall Hines on July 28, 1945, at her parents’ home in East Lansing. She and Marshall met at Michigan State University where they both worked in the MSU union cafeteria. Marshall preceded her in death on October 22, 2012.

Janet’s early years were busy with MSU events which she attended with her father, Athletic Director Ralph Young. As a young teen, she loved accompanying her father to his office on Sunday mornings to help compile track statistics and team reports. She also loved the indoor track meets where she kept track of the athletes’ scores and times. She said she felt very grown up doing that. After she got her driver’s license, she often acted as chauffeur for visiting sports dignitaries. At her father’s request, after he hired Duffy Daugherty as football coach, she drove Daugherty and wife Francine around East Lansing to look at houses. While attending MSU, she danced in the Spartan Spotlight Review, very cleverly saying that was “when I was Young!” That group sponsored trips to entertain troops at Percy Jones Hospital, Fort Custer, and in Service Clubs. She turned down an invitation to go on a USO trip because of her approaching marriage. Janet and Marshall were married at her parents’ East Lansing home. Marshall had a two-day leave, after which the couple left for South Carolina.

In 2016 Janet was honored for her 60 years of service to the Sparrow Service Auxiliary, being named Volunteer of the Year by the Capital Area United Way. She was a charter member of the Sparrow service group and helped establish the first gift shop in the hospital. Janet often told people that after the men came home from the war, the women were anxious to get out and do something out of the house. She went to a meeting about a child study club for women where the speaker from Sparrow told them about needing a gift shop. Twelve women signed up that night. She served in an array of leadership positions over the years, was a member of the Women’s Board of Managers from 1974-1989 and board president for two years. She oversaw the fundraising effort that brought the Caritas statue to the lobby of Sparrow Hospital’s main facility and was active in the Auxiliary group that raised funds that paid for the first elevator in the hospital.

In addition to her husband, she was preceded in death by her parents, Ralph Young and Florence Ward Young, sister Virginia “Ginny” Young Duncan and brother-in-law John “Kenneth” Duncan of South Bend, IN.

Although Janet is gone, her family and friends can hear her voice: Remember the best times. The laughter. The song. The good life I lived while I was strong. Continue my heritage. I’m counting on you. Keep smiling and surely the sun will shine through. My mind is at ease. My soul is at rest. Remembering all and how I truly was blessed. Continue traditions, no matter how small. Go on with your life. Don’t worry about falls. Until the day comes we’re together again.

A memorial service will be held at 2:00 p.m. on Wednesday, March 27, 2019, at the Estes-Leadley Greater Lansing Chapel. Her family will receive friends beginning at 1:00 p.m.

Memorial contributions may be made to Sparrow Service Auxiliary.