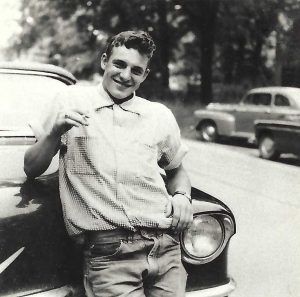 Jim is survived by his sons, Timothy (Yuko) and Matt (Maryann), and his 5 grandchildren: Tom, Joe, Piper, Paige and Danny.

A lifelong resident of Lansing, Jim attended Lansing Eastern High School. He earned his barber’s license through completing the Barber College program in Detroit. Jim started barbering in Frandor until being hired into Oldsmobile. Jim dedicated 36+ years with Oldsmobile-General Motors and retired as a millwright. He kept his barber license current up until recently “just in case.”

Throughout his life, Jim enjoyed deer hunting up north, coaching his sons in football, attending Spartan hockey and football where he and Karen were season ticket holders. Spending as much time as possible in Venice, Florida was Jim’s true passion after his retirement.

A memorial visitation will be held from 12:00 – 2:00 p.m. on Sunday, September 25, 2022, at the Estes-Leadley Greater Lansing Chapel. In lieu of flowers, memorial contributions may be made payable to the Old Newsboys Association.

Matt and Tim, sorry for your loss!
Betsy and Gary Clark

Thank Mr and Mrs Clark. Hope to see you on the 24th

I am very sorry for your loss. I did not know him, but your mom was my teacher many years ago. I did not realize she was gone. She had me to her house a couple of times and I used to catch spiders and give them to her. She was no doubt one of my great memories of my childhood.

Thank you for your kind words

So sorry to hear this Matt and Tim. Your parents were awesome people! I have great memories from our wrestling days together!

Sorry for your loss Pierson family. I know they were great parents by knowing how loving and kind their son Tim has been to me and my family. Please celebrate a long and wonderful life they had. Praying for healing during this tough time.

Matt & Tim,
Sorry to hear about Jim, and want to give you both our prayers. Jim and Karen were great school mates as well as friends. They will be missed.
Don and Marilyn Finney