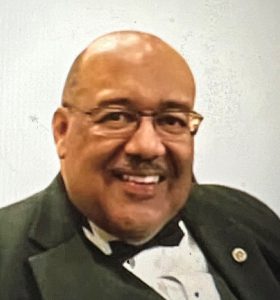 Michael, was born September 6, 1949, in Cincinnati, Ohio, to James O. Pillow and M. Alberta (Bishop) Pillow. Michael was the eldest of four born to this union. His sisters were Beverly, her twin, and Linda. Growing up in a home that loved and honored God, Michael gave his life to Christ at an early age and became a member of Greater Liberty Missionary Baptist Church. He was extremely active in service to the Lord, serving on the youth and young adult usher board and teaching Sunday school during his later years of high school through college.

Michael was a quiet but joyful, fun-loving person who enjoyed math, sports, and being surrounded by family and friends. One of his favorite sports growing up was baseball, which he played from childhood through high school. Even as an adult, he coached a Little League baseball team for years. Michael loved music. As a teenager, he carried his radio with him wherever he could. He also played the saxophone in the Walnut Hills High School marching band and orchestra from 7th through 12th grade.

From an early age, Michael was quite frugal. He loved working hard and saving his money. He and his dad provided lawn care in the community and Michael was a cashier for a local grocery store after school and on weekends. When he approached his parents to request his first car, they were concerned about a down payment and Michael quietly went to his locked desk drawer and produced the full amount for the payment that he had saved.

Growing up, Michael was an avid Boy Scout, from receiving numerous honors and awards as a Cub Scout to achieving the highest honor of Eagle Scout. The Cincinnati Gas & Electric Company noticed an article about Michael as an Eagle Scout in the Cincinnati Enquirer newspaper and offered him a 5-year full scholarship to attend the University of Cincinnati (UC) and study mechanical engineering. He became a dedicated member of Kappa Alpha Psi Fraternity, Inc., during his years at UC and held many offices in the fraternity throughout his lifetime, recently earning his 50-year member recognition. Michael graduated from UC as a mechanical engineer and earned his Master of Business Administration from Xavier University. His career included working for General Electric in Cincinnati/Evendale, Ford Motor Company in Cincinnati, Oldsmobile in Lansing, Michigan, and for the state of Michigan. He also taught night school at Michigan State University.

Prior to moving to Lansing, Michael united with Remell Sanders in marriage and was blessed with his first son, James Michael Pillow Jr. (Jay). He later united with Tanya (Armstrong) Pillow in marriage, who is now with the Lord, and gained her two sons, Monty and Scott. From this union, Michael was blessed with his youngest son, Andre Ramon Pillow. In Lansing, Michael joined Friendship Baptist Church. He attended men’s Bible study, sang in the male chorus, and was a trustee of the church.

Michael developed a love for golf and pursued golf outings whenever time permitted. He fostered this love of golf in his son Andre and his granddaughters. God was later faithful to Michael in uniting him with his wife Diana (Jackson) Pillow in marriage. Through this loving union he gained Diana’s son Jay (Carla), daughter Sonya, granddaughters Destanie and Ja’Niya, and a host of family and friends. Throughout their joys and illnesses, their love never wavered. They were a blessing to each other. Diana and Michael loved one another dearly and strongly. Diana thoroughly and lovingly took great care of her husband refusing to leave his side until he was called home.

Michael is reunited in glory with his mom, dad, sisters (Beverly’s twin and Linda), other relatives, and friends who met him at Jesus’s feet. He is survived by his wife, Diana, sister, Beverly, sons, Jay (Monette) and Andre, grandchildren, Ava, Boston, Naya, and Oaklee, nieces and nephews, Danica (Vinicius), Adoria (Bryan II), and James Ricks III, great-nieces and nephew, Addison, Bryan III, and Charlie, and a host of other family and friends.