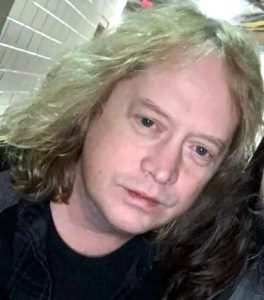 Age 57, of Lansing, MI, left this world unexpectedly on November 3, 2021, surrounded by family at Sparrow Hospital in Lansing, MI.

Jimmy was born in January 1964 in Detroit, MI, and grew up in the Rosedale Park neighborhood. He attended Bishop Borgess High School and studied music at Lansing Community College. Jimmy was an accomplished musician and guitar tech. As a musician, he was in many bands most notably The Point of Wilmington, NC, & Klawz of Lansing, MI. As a guitar tech, he worked for Bob Seger and the Silver Bullet Band, OAR, Jerry Cantrell (Alice in Chains), Chris DeGarmo (Queensrÿche), Sponge, Cry of Love plus many others. He worked as a stagehand at the Breslin & Wharton Center (East Lansing), and Joe Louis & Little Caesars Arena (Detroit). He was also an AV tech at LCC.

A fan of music, Jimmy listened and learned. A lot of history was made.

As a young boy, he read the liner notes of albums and even wrote to Apple Records in London, England to let them know he was available to play with The Beatles, (-should they ever need a drummer!)

Then as a young teen, he started his very own Fan Club for the band Led Zeppelin, by placing an ad in Cream or Hit Parader Magazine! Fans were asked to write to him via a PO Box, (opened up with money from his paper route!) He received so many letters for the Fan Club, the post office was overwhelmed with his small PO Box, they had to shut it down!

Finally, as a young man, in Los Angeles, CA, Jimmy was serenaded “Happy Birthday” at The Rainbow Bar & Grill by singer, Lemmy of the band Motorhead!

He had a quick wit and a knack for putting people at ease once you got to know him. He loved being on the road and met his wife Wendy while he was on tour in Daytona Beach where she was working as a Club DJ. They had so much in common and a similar love for music that they hit it off right away. Several years later, they reconnected on Facebook, fell deeply in love, and married.

With a deep and abiding love for animals, Jimmy also leaves behind his cats Edward, Kit Kat, Big Boy, and Bullet. In remembrance of Jimmy’s life, the family asks that charitable donations may be made in his name to Capital Area Humane Society.

A celebration of life will be held at 3:00 p.m. on Saturday, November 20, 2021, at Christ Community Church, 227 N. Capitol Ave., Lansing, MI, with Pastor Mike Dunkelberger presiding. Arrangements are by the Estes-Leadley Greater Lansing Chapel.

had some wonderful times with jimmy over many years. from michigan to north carolina to mississippi to vegas. our paths crossed many. he was a super funny and smart guy. sorry to the family for this incredible loss. he will be missed. ty

Jimmy, much can be said how music brought so many of us together. And so it goes of life in music and on the road. Perfect strangers assemble for a rehearsal or on a tour and become family forever more.

Ours is such a story. Jimmy you are missed my friend.

Much love to you and the family you leave behind.

His quick wit and love of life always made me smile, no matter how dark the day.
The universe gained a wonderful soul, the world will miss him, but not forget him.
Love and care for yourselves as you love and care for those who grieve.
Peace.

In the short time I knew Jimmy, it was like we were friends for years. We always laughed & he helped me in learning the ropes on the Bob Seger tour. A good man that is obviously loved & missed. God bless, my friend.

I toured with Jimmy with Bob Seger. Back then is when I was getting serious about learning everything about guitar teching and construction.
Every time I approached Jimmy with a question, the answer was always a lecture. He always welcomed me around his bench and it was amazing asking questions about all the pictures he had on his station.
He was truly a man who lived his passions every day of his life.
I’m gonna miss you old pal.
I’ll see you later for sure Jimmy…
Keep them in tune up there…
Rest in peace.

I was shocked and saddened by the news of Jimmy’s untimely death. My son Darrell Newton was a guitar player in The Point Band. He and Jimmy became friends as well as band mates. I just know they are together again and keeping the music going.

We met when he was teching for Powerman, and I was with Pantera. Not only sharing the workspace, but becoming fast friends and learning from each other. I personally love dudes that are funny ‘smartasses’, and he fit the bill perfectly! We remained friends and he sure will be missed. Heaven gained a great man.