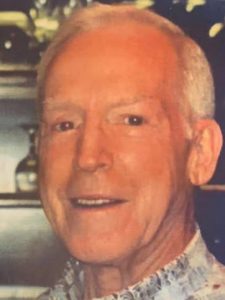 James (Jim) Dulworth, of Lansing, passed away peacefully at his home on May 23, surrounded by family, one month before his 93rd birthday.

Jim was born in Jackson on June 15, 1928, the son of Taylor and Vera Dulworth. He attended Hudson High School and graduated from Michigan State College with a degree in industrial and behavioral psychology. He enlisted in the army and was sent to Korea as part of the army signal corps. Upon his return from Korea, Jim worked in Detroit for Minnesota Mining and Manufacturing (3M).

In 1956, Jim married Mary Atkinson, also from Hudson. Soon after, he was recruited by Grosse Pointe schools to teach 5th and 6th grade. The family, which now included two little girls, moved to St. Clair Shores. During this time, Jim earned his Masters of Education from Wayne State University and his Education Specialist degree from Michigan State University. After several very successful years teaching at Gabriel Richard Elementary School (“the best job I ever had!”), and two more children, Jim accepted the position of building principal at Schalm Elementary School in Clawson, and he moved his family to Huntington Woods. During the mid-seventies until his retirement, Jim held the positions of Curriculum Director and Assistant Superintendent of Grand Ledge Schools.

Jim was an artist whose medium was wood; he restored fine antique furniture and designed and built whimsical tables and chairs for family and friends. His grandchildren all own “a table Grandpa built” and “a little animal Grandpa carved.”

Jim Dulworth leaves behind a family who loves and honors him, who are grateful for every day they had with him, and who will miss him always.

In lieu of flowers, the family requests that donations in Jim’s name be made to the Hudson or Grand Ledge Public Libraries or Hospice of Lansing.

Mary, we are so sorry. Jim fought a valiant fight with you right by his side every step of the way.
He will be missed.

Dear Aunt Mary and family. He is a bright light who will live in our memories forever. So much fun, so much energy and enthusiasm! Miss him! Love, Mark