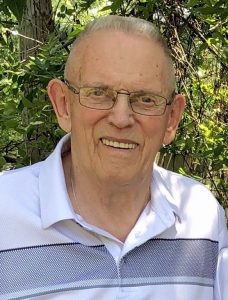 James Orin Alrick completed his earthly service to his Lord and others and was called home to his Heavenly Father on December 29th, 2019. He had a life filled with his love of being a husband, father, father-in-law, grandfather, great-grandfather and friend.

He was born February 28, 1932, in Polk, Minnesota, to the late James and Agnes Alrick. They relocated to the Upper Peninsula and was raised in Sault Saint Marie. He enlisted into the US Army where he served during the Korean War. After serving, he also served in the US National Guard. James attended Michigan State University obtaining a degree. He then met his soul mate and was married to Jean Joyce (Belsito) Alrick and was married for 63 years. The couple resided in Lansing, MI.

Jim’s greatest joy in life was supporting all of his grandchildren and bragging about their scholastic, athletic and professional accomplishments. He prided himself on being present and supportive of all of his grandchildren during their careers as high school and college athletes. He was a 35-year MHSAA official, but his best officiating came from the stands where all of his calls were correct. Jim had a love and passion for all sports but was the ultimate Spartan, DeWitt Panther and fan of any college his grandchildren attended.

Anyone that knew Jim knew he always had a good story to anyone who would lend an ear. His stories often were about the many endeavors over his 87 years of life. His hardworking ethics started in the UP selling newspapers, working at the Soo Locks and the hockey facility for professional hockey players; serving in the US Army and National Guard; his many years as a sales person and even his retirement job for the last 20 years as a crossing guard for Lansing Public Schools. Through these experiences he was able to touch the lives of many of those around him. However, the greatest story he loved to share was being married to the love of his life for 63 years.

James is survived by his wife, Jean (Belsito) Alrick; his children, Patti (David) Schiewe, James Alrick, Jean (Bret) Wegenke, and Mary (Paul) Mills; grandchildren, Jessica and Alicia Beardsley, Brandon (Taryn) and Kailyn Wegenke, Hailey Moyers, Sydney and Kylor Mills; and great-granddaughter, Nora Wegenke. He was looking forward to the birth of his second great-grandchild in 2020. He was also survived by many nieces, nephews, as well as many dear friends.

He was preceded in death by his parents, James and Agnes Alrick, sister Lois (Buck) Massey, and brother Lyle (Terry) Alrick.

The family wishes to thank the staff at Sparrow Hospital Neuro Intensive Care Unit for their professional, gracious and compassionate care for Dad and the family.

Visitation will be held at Estes-Leadley Greater Lansing Chapel, 325 W. Washtenaw St. in Lansing on Sunday, January 5th from 2-5 p.m. The Funeral Mass will be celebrated at 11:00 a.m. on Monday, January 6th at the St. John Church and Student Center, 327 M.A.C. Ave., East Lansing (parking available in the ramp directly behind the church).

Much love to you all

To know him is to Love him……….. Our LOVE to all of you, Roger & Rosemary xoxo

I love you Uncle Jim! Rest In Peace.

My prayers and thoughts are with your family. Love Amy Jo Filice Vallier and Rick Vallier