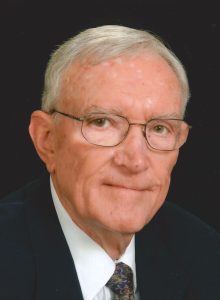 Ed was a graduate of J.W. Sexton High School, and later Michigan State University with a BA in Construction Management. Ed served as an Infantry Captain in the United States Army, and later the Army National Guard. He worked for many years as a superintendent at General Motors. Ed was very involved in the Masonic Lodge, Shriners, First Presbyterian of Lansing, and the Lansing YMCA Mystic Lake Camp. He enjoyed canoeing and the outdoors, and spending time with friends and family.

Ed was preceded in death by his parents, and his wife of 55 years Catherine A. Purchis in 2013.

This is such sad news. Ed was such a wonderful and gracious gentleman. We appreciated and will always treasure his friendship. He did so much for so many and will truly be missed by all.
We send our deepest sympathy to Ed’s dear family.
Jim & Barbara Clark

I was fortunate to have Ed as my neighbor for the last 13 years. He would volunteer to help me when ever I would call him at a moment’s notice. I really enjoyed his positive attitude and helping hand. I will miss him and cannot believe he is not next door anymore. My sincere condolences to the family.

Sending our heartfelt condolences to your family. Our parents were long time friends over the years and had many fond memories of Shrine activities they were involved in. It was a friendship that they truly enjoyed.

I had the fine pleasure of working for Ed at Oldsmobile – BOC. A finer gentleman I’ll never know. Very kind, honest and fair. He was a wonderful man. Gone TOO soon! My prayers are with the family!!!!

Our deepest condolences to Ed’s family for your loss. We had the great pleasure of being neighbors for 18 years, and enjoying being with his whole family on so many occasions. I also had the additional contact at Oldsmobile and working with Ed on many, diverse, and challenging projects, where he was a very talented and affable cohort.
He will certainly be missed by so many of us.

Sue and Sandy, so sorry for the loss of your Dad. He was such a nice, caring man and had a great sense of humor. Your Mom and Dad were always quick to laugh and to make others laugh with their wittiness. I loved coming to your house during the high school years and enjoying their company. Hope the memories give you comfort during this hard time. Thoughts and prayers for you both.

Out here in Colorado, I was really sorry to hear about the passing of Ed Purchis, Ed and I went through all schooling from elementary to college. He was a great friend and classmate. We played all sports together from Gray Y in elementary Basketball to high school. We double-dated with Ed and Kay in high school. Ed and I sang in a high school barbershop quartet. Also, Ed and I sang in the youth choir at First Presbyterian Church in Lansing. He was a great friend and Senior high-Class President. I will miss seeing him when I come back to Michigan. I am sure he was a wonderful father and grandfather and will be missed by all He was our leader for all great class reunions.