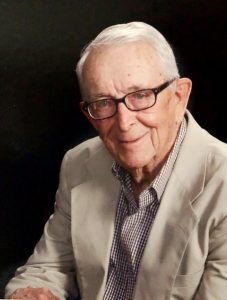 On Tuesday, February 23, 2021, Harry J. Brunet of Lansing, Michigan, loving husband, father, grand and great-grandfather passed away suddenly as a result of a pulmonary embolism at the age of ninety. Harry was born on December 23, 1930 in Vassar, Michigan to Victor and Mildred (Titsworth) Brunet.

After serving in the US Air Force, he received a Bachelor of Arts degree from Central Michigan University and later a Master’s degree from Michigan State University. He had a long career in teaching, coaching, and administration in public education. He began his career at Flint Kearsley School District where he was a teacher, principal, coach and assistant superintendent. He was superintendent at Mancelona before becoming the superintendent at Elkton, Pigeon, Bayport (Lakers #1 in the Thumb) where he became a legend. After retiring from the Lakers, he finished his career at Las Vegas High School, Las Vegas, Nevada where he was a teacher and athletic director. Harry was very active and held leadership roles in the Michigan Association of School Superintendents.

Harry was passionate about Michigan State University, especially MSU football and the MSU Marching Band. He also was a supporter of high school athletics. On Friday nights in the fall, he could be seen at football games all over the state of Michigan. He was especially proud of the Annual Harry Brunet Invitational Track Meet at Flint Kearsley High School. He was a member of the MSU Downtown Coaches Club and the Michigan Sports SAGES. One of his favorite pastimes was fishing. He loved all kinds, but his very favorite was ice fishing. He was a member of Lansing First Presbyterian Church and enjoyed attending Ferry Memorial Church in Montague, Michigan while at his Lake Michigan home and Big Pine Key Methodist Church while wintering at his home in the Florida Keys.

A memorial service was held on March 6, 2021 at the Big Pine Methodist Church, Big Pine Key, FL. A service in Michigan will be held at a later date.

One Message on “Harry James Brunet”

Our time was short together with you and Ruth but loved our time together in Aruba.
Our love of Big 10 ( go I U ) were enjoyed. Sorry you never made it to Indy for an IU / MSU game.
Watch over us and your loved ones! You will be missed. Craig and Sue Thomson. Indianapolis, iN.