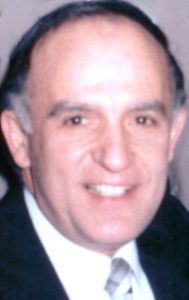 Gus is survived by his wife, Connie Kavalaris and his son, Jim Kavalaris.  He was preceded in death by his sister Athanasia Goutis. The funeral service is at 11:30 a.m. Friday, January 27, 2023, at Holy Trinity Greek Orthodox Church, 1701 E. Saginaw St., Lansing, MI.  Interment follows in Deepdale Memorial Gardens.  His family will receive friends at Estes-Leadley Greater Lansing Chapel from 5:00 to 7:30 p.m. Thursday, with a Trisagion service at 7:30 p.m.  In lieu of flowers, memorial contributions can be made to Holy Trinity Greek Orthodox Church in memory of Gus Kavalaris. Online condolences to family may be left at EstesLeadley.com.  From the traditional Greek: May his memory be eternal!

My deepest sympathies goes out to the family. We all loved Gus very much.
May his memory be eternal.
Nicolas Georgiou and Peter and Electra Nicolaou.

We are so very sorry for your loss and the loss to our church. I can’t ever recall having a conversation with Gus where I didn’t learn something new. His knowledge was vast and he was always supportive and willing to share and enlighten during our chats. I loved when he addressed me as “my buddy Patricia”. Several weeks before his stroke he called me to discuss ideas to improve services at our church – he was constantly thinking of others. I will always remember Gus as a man of wisdom, kindness, enormous love for his family & church and greatly respected by all that knew him. I smile when I recall the stories and quotes that he shared from his grandfather when Gus was a young boy – it is obvious that his wisdom was genetic!

Our love and prayers will be with you all on Friday for his funeral and in the days to follow. May his memory be eternal.

Connie and Jim,
I am so sorry for your loss. My parents were so fortunate to have your family as neighbors for so many years. My father always enjoyed the chats he had with Gus. I, too, found Gus kind and very caring. You both are in my thoughts and prayers.
Patricia McKouen

Gus was a fantastic older “brother” and mentor to me. I was initially drawn to him decades ago because of my involvement with church maintenance. As fellow project engineers we always clicked on any technical issue. He often realigned my thinking based on his vast experience, and I quickly grew to trust his word. In roughly forty years he never steered me in the wrong direction. Thus, his input continued to influence projects at church well after his direct involvement was less visible to most people. He was even coaching me last year about do’s and don’ts relative to concrete work for our big circle drive makeover.
He was also the go-to guy for anything related to our building architecture and original construction; he was there, calling balls and strikes. He explained to me the back story about our wood beam roof structure and even where the wood came from (Oregon) and how the very long beams were transported to Lansing (by rail). He also informed me about the function and location of each of the buried tension bars that keep our roof standing.
I cannot say enough good things about Gus my older brother in the Lord. I hope there is a special place in Heaven for those who tend to His House here on earth.
May he rest in peace.

My sincere condolences to you both! All 3 of you were treasured as dental patients! Many stories and loving memories. Dawn , Carol and I remember the old days when we worked there, Gus will be remembered and honored well.

Gus was one of the GOOD GUYS…worked with him at MDOT. Helped him down size a few items years ago when we sent them to be auctioned off. Sorry for your loss. Goodbyes are always the hardest thing to say…..

We used to be next door neighbors. He spent lots of time retrieving our boys’ frisbees from his roof. Always did it with a smile.

Dear Connie and Jim,
I’m so sorry to hear about Gus. I so enjoyed our chats at the MSU basketball games years ago. I have not had better seat partners since. My thoughts and prayers are with you.

Dear Connie $ Jim,
Our hearts and thoughts are with you during this time of Grieving . I Still remember Gus wisdom and sound engineering decisions when we worked together at Highway Department. He was always very gentle and kind. God Bless His Soul and God be with You.
With Deep Sympathy

My deepest condolences. I will always remember Gus, with the fondest of thoughts. I always enjoyed our chats. He will be missed.

What a great guy. I worked w/him on the river trail linking downtown Lansing w/MSU. I was w/the City and he w/the State of Michigan. The State developed the section of the trail that passed under 496 and 127 as this was State ROW. Quite a commitment on their part. Great guy to work with.

Dear Connie and Jim – Gus was an absolute joy. Conversations with him always brought a smile and the opportunity of learning a new bit of history (state, city, national, international, church – everything was of interest to Gus). You are in our prayers for comfort – may Gus’ memory be eternal.
Jan Munk
.

Connie: Kathy and I want to share our condolences on the passing of Gus. His story made me reflect on my grandfather who walked daily from his house on Chestnut to downtown Lansing. In addition, our meetings with you and Gus would take me back to my experiences at “The Laundry”. God Bless Him.

Dear Connie and Jim,
Connie and Gus would always come into my bakery, he was always a sharp and intelligent man. He was always kind with a bright smile, and our thoughts and prayers are with you.

Dear Connie and Jim,
My deepest condolences. May his memory be eternal.
John Mitsios

Jim I am so very sorry that you lost your dad. He’ll forever live on in your heart. God bless you and your family.

I worked for Gus at MDOT Local Services Division for several years. Gus was a great leader and was a pleasure to work for. He made me a better person. So very sorry he has passed.