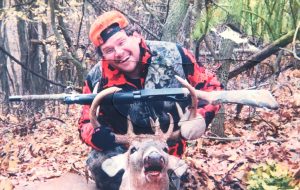 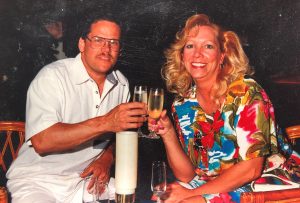 Gregg, age 61, was hunting, doing what he loved most, at a family farm in upper Michigan, when he tragically passed away. Gregg lived at a high rate of speed.  Whether it was his beloved KX500, his 1994 Dodge Dakota, or his Polaris Predator 500, all of which he raced competitively, Gregg did not dawdle.  Just a few months ago he finally threw out all but three of his trophies, filling a dumpster.  He truly had a character larger than life; even after his health issues began, he continued to attack life with gusto.

Gregg was born in Lansing, MI, to Phyllis and Ray Salisbury.  Gregg lived in Lansing as a child and into adulthood.  He met his wife, Susan, at a KWings game, they went on a date the next day, and were married six months later to the day in Montego Bay, Jamaica.  Gregg and Susan eventually settled in Portage, Michigan.

Per Gregg’s wishes, he will be cremated and buried in a family plot in Evergreen Cemetery in Lansing, MI, at 1:00 p.m. Wednesday, November 25, 2020.  Due to the virus, social distancing will be expected.  Memorial contributions in Gregg’s name may be made to Freedom Hunters, PO Box 600, Elizabeth, CO  80107, 303-884-0059, info@freedomhunters.org.  Arrangements are by the Estes-Leadley Greater Lansing Chapel.

He will be missed by many.

Thanks Monkey for your thoughts & prayers.

I wish we could of got together camping like we had planned, Rest In Peace my friend,

Thanks Tim, I wish we could of hooked up too, sometimes there just isn’t enough time in life. Thanks for being his friend.

Rest In Peace, and prayers for comfort for your family. You will be missed by many. Thanks for having me distract My now husband at work. If it wasn’t for you I may have never talked to him.

Thanks David, he had been connecting with a lot of old friends since he was on disability for his heart condition; I’m sorry you two didn’t hook up. He passed after shooting another big buck on 11/15, then that doe @ 200 yards when they found him, it’s a blessing with his medical issues. God took him home.

Susan we are so sorry for your loss.

Thanks you guys, it was tough, but he wasn’t happy with that trach and slowing down. God took him home.

Oh Greggo, where do I begin you maniac!!!! No more suffering for you my friend. Thank you for all the fun memories we’ve shared together. You will always be in my heart forever. I’ll look after Susie for you. “To Live In The hearts We Leave Behind, Is Not To Die”. RIP Love ya Buddy!

Thanks Denise, he’s home now and that’s OK up in heaven…

It was a pleasure to get to know Greg even though it was with his mouth wide open! Always enjoyed his hunting stories. His smiling face will be truly missed at Dr. Catherine Pikes Office!!

So sorry for your loss Susan! We are here if you need anything {HUGS}

Although I didn’t know Greg, I am a very old friend of Susan’s and sounds like she had finally met her match when she met Greg, operating at warp speed. My condolences to all his loved ones.

I will so miss you and your texts-They always made me smile and sometimes laugh out loud!

I will think of you often. Your friends Max & Marcella

I hope to visit a brother in Clevland, from there I would like to visit your grave at some point.
Pals

Saddened by your loss, Aunt Susie.
He was true to himself, always.
Goodbye and RIP, UG