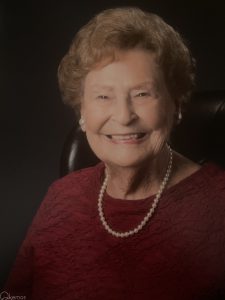 Grace passed away peacefully at home, surrounded by her loved ones, on September 29, 2022, at the age of 98. She was born October 20, 1923, in Elmhurst, Illinois. Grace had one sister, Betty, who preceded her in death in July 2022. She grew up in Elmhurst where she graduated from York High School. She married her first love, Richard Fellows, in 1943. He was enlisted as an Air Force B-24 pilot in World War II, and he was killed in action during the D-Day invasion of Normandy in June of 1944. Five months after his death, their baby girl, Joy, was born. It is unknown whether Richard knew at the time of his death that his young wife back home was pregnant. As a new mother and widow, Grace moved into her parents’ home with her newborn and lived there until she married her second love, Earl Van Valkenburg, in 1946. Earl also served in World War II. Together they had two more daughters, Gay and Jill, and raised the three sisters in Okemos, Michigan. Earl preceded Grace in death in 1987. Grace is deeply missed by her daughters, Joy, Gay (Norm) and Jill, in addition to six grandchildren and nine great-grandchildren. She was a longtime member of St. Katherine’s Episcopal Church in Williamston, Michigan, and any donations can be made to the church. A celebration of life will be held at a later date. Grace will be remembered by all who knew and loved her for her generosity, loyalty and fun-loving spirit.

Grace will always be in our hearts and memories. We had so many good times with her. We are blessed. Jo and Ivan

Praying for your family as you mourn the passing of Grace. I will always remember the pictures of her smiling and holding Gay’s Golden puppies.

I’m so sorry for the loss of your mother, Gay and family. May all the love and memories you shared give you peace and comfort in the days ahead. Much love, Sherry

RIP sweet lady. You have had such a long and full life. It was a delight to see your beautiful smiling face in so many pics with your family. Always smiling. God bless the family who’s missing you.

So sorry for your loss Gay, Grace was the sweetest lady! Always exchanged hugs at church! May she rest in peace. God Bless..prayers and big hugs.
Kay & Phil Pixley

Grace was one of my St. Katherine’s heroes and role models. A fabulous friend who I loved sharing a few with and will always see her at the end of the pew. Peace and prayers for Grace’s family.