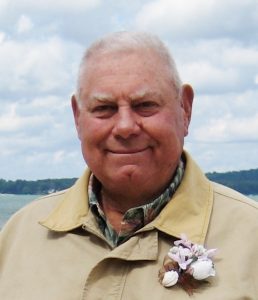 Jerry met the love of his life, Della Mae at Eastern High School. He went on to earn his Bachelor of Science degree from Michigan State College. He joined the Air Force and was Honorably Discharged as Captain. He furthered his studies and received his Master’s Degree at Michigan State University before obtaining his Medical Degree from the University of Michigan and becoming a General Practitioner and fulfilling his promise to God.

Jerry was passionate about his family and their happiness, knowing fully that there is no simple path for any of us. His love was unparalleled and he always taught them that good decisions would follow the bad, and all things could be made right.

Jerry is survived by his loving and devoted wife of 66 years, Della Mae; three sons, David (Debra), Stewart (Deborah), and Andrew (Lesha); four grandchildren; and three great-grandchildren. He was preceded in death by his parents and brother Harry.

The funeral service will be held at 12:00 p.m. on Thursday, January 30, 2020, at the Estes-Leadley Greater Lansing Chapel. His family will receive relatives and friends beginning at 11:00 a.m. on Thursday at the funeral home. Memorial contributions may be made to St. Jude Children’s Research Hospital.

I have such great memories of Doc Powell. He was my family doctor for years and I loved hunting with him and Dave Powell. I shot my first bear with the Powell boys in Canada in 1974 when we camped along a beautiful trout stream. I’ve known the family for 46 years. When I moved to Lansing, they were the only people I knew in town. I so loved hearing about the latest outdoor adventures of Doc when I visited with Dave at their home. Doc could spin such a great story about a hunting experience and he was always so interested in your experiences too. I just loved hearing about his experiences and learning so much from him about the outdoors. RIP great hunter, husband, father, grandfather,doctor and friend.

My condolences to the family of Jerry Powell. I was his next door on Riley Street as a youth, some nine years younger, when Jerry and brother Harry were in College. Jerry was a great inspiration to me, a great athlete, student, taught me how to safely and accurately shoot a bow and arrow, just an all around really nice young man. My family and I attended Della and his wedding and reception. I was able to see him occasionally at his parents home while I was still home, and he was always cheerful and fun to be around. I am fortunate to have known him so well in those early years. Bless his wonderful soul.

Della, I was a long time patient of Docs and employed by your office in 1976-1978. I am sorry for your loss and will pray for your family. I still miss the friendships I had there. I still remember what he helped me with in raising my 3 children. I have thought about you and your family often through the years. Just remember the good times!
Sincerely, Nancy and Felix Diaz

May his memory be a blessing.

The Stephan family extends their deepest condolences and prayers to the Powell family.

I was a former patient of Doc Powell in the ’70s, and have many fond memories of him. He was more than a Doctor, he was a friend. This world seems somewhat darker without him in it. RIP, Doc, may your reward in the afterlife be plentiful. Thank you for being you.