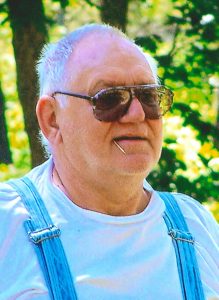 George H. Zajac, Jr., age 85, of Baldwin, MI, formerly of Holt, MI, passed away unexpectedly yet peacefully on July 25, 2020, at his home in Baldwin, Michigan. Born November 14, 1934, in Hamtramck, George grew up in Turner where he met the love of his life, Pauline.  Together they moved their young family to Holt in 1965, becoming active members in the community and every aspect of their devoted children and grandchildren’s lives. While an avid hunter, traveler and snowmobile enthusiast, his most recent favorite pastime was being a passionate and proud Grandpa. He especially enjoyed sharing his love of the great outdoors with his family as well as accompanying them on many academic, athletic and vocational events.  At an earlier age, George was also a Golden Gloves Boxer and a stock/race car driver… predominantly at Whittemore Speedway (where he was a Season Champion) as well as Spartan Speedway for several years. Described as a ‘mountain of a man – fierce, brave and strong’ on the outside, George was extremely compassionate. He lived his very full life with an undeniable focus on the well-being of others including serving as a Volunteer Fire (Captain) for many years at Delhi Township Fire Department. His professional career also reflected that ferocious and well-respected work ethic along with his widely-known ability to ‘fix/repair anything.’ Always working diligently in various capacities including dairy processing for a number of years at Quality Dairy’s milk production facility, George eventually retired after a long career with Delhi Township. However, that simply allowed him to start yet another 12-year career in Baldwin as “Dad” at the local/family favorite ‘Mom & Dad’s Cone Shoppe’ for which he and Pauline established and worked tirelessly in his post ‘retirement’ years.

Knowing that George was a man deeply rooted in personal faith, we are still saddened beyond words as we temporarily say goodbye to our husband, father, grandfather, great/great-grandfather, uncle and friend… yet we look forward to the day when we will once again gather and rejoice together.

Graveside services will be held at Maple Ridge Cemetery at 4149 Willoughby Rd. in Holt on Friday, July 31, 2020, at 1:00 p.m. In lieu of flowers, please consider making a donation in the name of George Zajac to the Charity of your choice. Arrangements are by the Estes-Leadley Holt/Delhi Chapel.

Thank you Mike for your thought memories. Tom

Our thoughts and prayers for the amazing Zajac family. So sorry for the loss of your patriarch. George will be missed by many.

Thank you for being part of our family.

Thinking of the Zajac family at this time. My prayers are with you as you say a temporary goodbye to such a beloved Man. The light in heaven is brighter with Georges infectious smile and love shinning down on you all. As in all things may the lord guild you through.

Uncle George, you be greatly missed. Aunt Pauline and entire family, our love, thoughts and prayers are reaching out for your comfort. Wish we could be there.

Stay safe and love to all!
Connie, Bell, Josef and Justyn

During my years as part of the Carter family, I always looked forward to time spent with the Zajacs. George, although trying to portray a gruff kind of guy, was full of kindness and humor. As a ‘city girl’ and going camping for the first time, George found fun in teasing me, just as he teased Gloria constantly, by tossing a slapped mosquito into Gloria’s great goulash or sucking down a raw egg when asked repeatedly how he wanted it cooked. His laugh was infectious and his smile adorable. He and Pauline were a wonderful addition to the Holt Community. They raised a wonderful family who, although had a stern father when needed, were blessed to be loved by him. Thank you for sharing him with so many others.
My most sincere condolences to Pauline, Mike, Nanette, Mark,Tom, and all the family.

I am thinking of all the zajac’s. George was full of life and would be the first one to step up and give each of us a hard time in his witty way. During our camping trips in Baldwin he surrounded all of us with smiles, laughter and compassion. I think most of us thought of him as our Dad. He will be greatly missed.

Our deepest condolences go out to the entire Zajac family. Holt has lost a great friend. God Bless.

Condolences to all the family members and friends. Remember the great times in Baldwin.
Rest in peace George.

We met the boys first, Danny, Mitch, Matt, and Jake at, of course, football! The ability was evident but what really shone through was their character; on-time, hard-working, humble, team-first. We thought Man, great kids! Then we met their parents. Same thing; real nice folks, interested in all the players, always first to help-out, no pretense but always quietly present with full hearts. We thought Wow, great families! Then we met George and Pauline and it all made sense. They set the tone, showed the way. Strong backs, keen and curious minds, and huge hearts. Obviously they loved every member of their their clan, but it extended to almost everyone they met! If you stepped foot in their house you quickly felt you had known them forever. They made sure you felt welcome. The kind of people you want to be like if you can. George’s memory and legacy are secure. Pauline, his family, his friends, and the lives he otherwise touched will make certain the Zajac Way carries on. You’ve paved the road George..burn a little rubber, rest well!

Thank you for your amazing story about our family.

In the seventies I joined the Delhi Fire Department and George was one of the first guys I met. I enjoyed working with George. He was a fun person to be around. We had many laughs together. I have thought about George many times over the years. RIP

Growing up with Tom, and my Aunt & Uncle being best friends with George and Pauline, I spent a lot of time with the Zajac Family! I’ve been trying to recall a time when I was with Big George, that he didn’t have me laughing, I can’t!! Thank You Big George for ALWAYS making me laugh!! You’ll be missed!! Oooh and stay sober and stay out of trouble!!:)

Thank you for your thoughts during this time