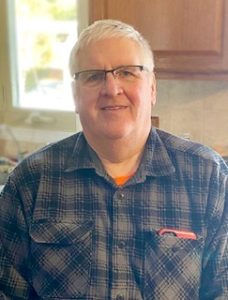 Gary was born March 7, 1953, in Akron, Ohio.  He graduated from Everett High School, in Lansing, MI, and graduated from Lansing Community College on a scholarship for basketball.  He dedicated 30 years of service to General Motors, and seven years with Michigan CAT.

Gary was a devoted husband and father who deeply loved his family and friends. Gary married the love of his life, Pamela, in 1975, and spent over 45 wonderful years together with ‘Babes’. He was an amazing Proud Papa and role model to his baby girl Jamie Renee, and his favorite son Gary Nicholas.

He was a gentle, kind, and generous man, known to his friends and family as ‘Moose’; his heart was as big as the animal he was named for.

He was an MHSAA Official for Youth Football, Basketball, Baseball, and Volleyball, and an Athletic Director and coach at Our Savior Lutheran School, in Lansing, MI.  Gary enjoyed hunting, fishing, camping, playing cards, vacations with friends, and spending summers at Silver Lake in Traverse City, MI.  He was an avid Ohio State Buckeye fan, and a devoted believer in the Best Damn Band in the Land. His absence will be felt by all who knew him.

A celebration of Gary’s life will be held at a later date, with an announcement to follow.

Arrangements are by the Estes-Leadley Greater Lansing Chapel. To share memories and condolences please visit estesleadley.com

Pam : I am so sorry. It just seems impossible. Gary and you were always such great friends of mine. He was always ready to give a helping hand. I had known him a long time and it is such a great loss. You are in my thoughts and if there is anything I can help with please ask.
Duncan

To the Steffy family. The Demorest family offers their deepest sympathy for your loss Gary will be missed by all his Viking family and friends

I am so sorry to have heard of Gary’s passing. He was a one of a kind, and a friend to me and many others at Fisher Body. My deepest condolences to his wife and the whole Steffy family for their loss. He will not be forgotten. Rest in peace old friend.

Dearest Pam and Families,
Our families have all suffered an immeasurable loss with Gary’s long-suffering then Pam with your father’s passing unexpectedly Monday then Gary on Wed..

We have suffered a terrific loss of an honorable and compassionate individual – GARY LEE STEFFY. I will dearly miss our regular phone conversations where we shared thoughts and opinions of the world’s situations and families’ adventures. As we all know, Gary is now in a better place without pain and anguish May they rest in PEACE!! Your Loving Sister, Lavonne

Roger and i were so sorry to hear of the passing of gary and also your dad. We will be keeping you and your family in our prayers.

Pam, Gary(Bear) & Jamie. Our deepest sympathies to all of you in Gary’s passing. He was a great guy and such a great friend, especially to Bob. We have lots of memories from our times we spent with Gary and so thankful he and Pam were able to stand up for us at our wedding this past September. We will certainly miss him but have all our memories to keep him in our hearts and minds. Love to you all. Di & Bob

We are so sorry to hear of the passing of Gary. He was such a selfless man and treated my parents with an unmeasurable amount of kindness. He treated them like family and he will always hold a special place in our hearts. May he Rest In Peace and watch over all of us until we meet again.

Pam, I’m so sorry to hear of Gary’s passing. It does not seem possible!!! You and your family are in my thoughts and prayers.
Linda Reidel

Pam Ive only met you once and I only stopped and talked with Gary a few times but was drawn to him immediately. While I didn’t get to know him well I felt I knew him. One thing we talked about was the speed of cars in our neighborhood. I want you to know he’s probably smiling down, as I took his lead and had contacted ECSD about our problem and thier helping us, I only wish I could stop and see him again. My heart goes out to you and if there’s any neighborhood thing you ever need done Id be glad to help.

I worked with Gary at Enterprise and he was one of those people you could never forget. It was alway fun working with Gary and in the course of our conversations he told me about what a great baker he was. In fact, he made me a beautiful birthday cake that he and Pam delivered personally to my home! He was truly a big hearted, thoughtful and kind man!
Pam, I am so very sorry for your loss. Gary was a great guy. I will keep you and all your family in my thoughts and prayers.

Pam, Gary and Jamie…
So sorry to learn of Gary’s passing. I have so many fond memories of him, starting with my days working for him as an official at Our Savior. Gary is the reason I added football officiating to my resume. I remember him repeatedly asking me to ‘take the plunge’ and when I’d say, “yeah, I will one of these days”, he’d counter with ‘OK, but you’re going to and once you do you’ll wish you had years earlier!’. He was SO right! He was also very good to my boys, be it keeping them employed officiating or taking them on an occasional kettle corn job. He’ll be missed…gone but never forgotten.

Pam and family, We were just heartbroken for you to hear of Gary’s passing. Though we knew him but briefly we were touched by his happy personal and joyous heart. May all of the many fine memories you have of him bless and comfort you during your grief and beyond. May God bless you all

Dearest Pam, Gary Jr.and Jamie, We are at a loss for words of the news of our Dear Friend and Brother Gary Sr.!! Our sincere condolences go out to each and every one of you! Let it be known that he impacted many many lives, He was very special person and we will all miss him dearly!! May God comfort you all and please let us know if there is anything we can do! Big Mike and Barb Bokovoy

So sorry to hear this news. Will truly miss him he was a great camping friend with Deepest sympathy

I enjoyed Gary’s company when we worked together at Enterprise Rent a Car. He was fun to be around and was missed after he left. I am sorry for his family. God bless you all!