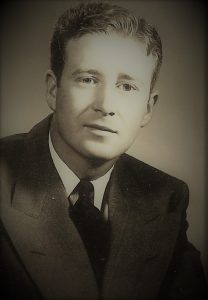 Frederick J. “Ted” MacDonald Jr. age 98 of Lansing, Michigan, formerly of Horseheads, NY, passed away on Thursday, September 23, 2021. Frederick was born January 17, 1923 in Elmira, NY, the son of the late Frederick J. and Emily Louise Moss MacDonald. He graduated from Horseheads High School in 1940 and completed his toolmaker apprenticeship at American LaFrance in Elmira, NY. Frederick was a Veteran of World War II, serving his country with The U.S. Navy form 1943 – 1946. He received his degree in Mechanical Engineering from Clarkson College (University) in 1950. Ted married his wife Marilyn Hastings of Albion, Michigan in 1952.

Frederick was predeceased by his parents, his sister Kathleen Fridmann of Horseheads, NY and his only child Karl Frederick MacDonald in 1979. He is survived by his granddaughter Heather MacDonald of Chesterfield, MI; brother and sister-in-law: Sandy and Rosemary MacDonald of Grand Rapids, MI; sisters: Daryl Sharement of Ann Arbor, MI and Ann Jackson of Lexington, KY; several nieces, nephews, cousins, and a host of caring friends.

Frederick was a retired employee of the GM Oldsmobile Division in Lansing Michigan, a member of the GM Lansing Salary Retirees Club, The Mayflower Society, the 12th generation from passenger William White, and a member of The Albion, MI Elks Lodge. Frederick requested that there be no calling hours. Graveside Services will be held on Wednesday October 13, 2021 at 11 AM The MacDonald Plot in Maple Grove Cemetery in Horseheads, NY and are entrusted to the Lynch Funeral Home, 318 West Broad Street Horseheads, NY. Per Frederick’s Request, part of his cremains will be interred in the Hastings-MacDonald plot, in Riverside Cemetery in Albion, MI, next to his son Karl Frederick MacDonald and the Hastings Family. Those arrangements are entrusted to the Estes-Leadley Funeral Home in Lansing, Michigan.

Words of Condolence and Memories may be shared at www.lynchsfuneralhome.com .

My condolences to Sandy and family during this difficult time! I will miss the entertainment at deercamp!

So sorry to hear about Teddy. Enjoyed our times at deer camp and will always miss him and his stories. Rest In Peace Frederick!

Our condolences to Heather on the loss of her Gramps. We know how much he ment to you. He was a great guy. He lived a long and full life. Heather, you are fortunate to have so many memories to reflect upon. Also our condolences to Sandy and Rosemary and the rest of the family.