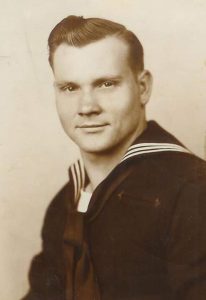 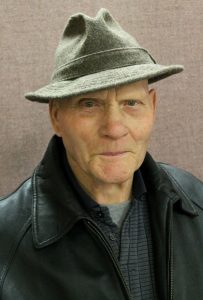 Frank was born to Emory and Ora (Sanders) Franklin in Hutsonville, Illinois, December 28, 1925. He hitchhiked to Michigan in the early 1940s and met his late wife Lois (Warner) Franklin. Frank was drafted in the United States Navy in 1944 after just turning 18 years old. He married Lois that same year. He returned to his wife Lois after his deployment. The two lived in Jackson, MI, where they started their family before buying a farm in Mason, MI in the early 1960s. Frank, Lois and their four sons worked their farm, which they called ‘Hell’s half acre.’

Frank worked as an Ironworker for over 50 years; he was a member of the Ironworkers Local 25. As a hobby Frank and his sons built race cars and raced them in Spartan Speedway and Springport Speedway. He enjoyed horses and always wanted one; but they didn’t go fast enough for his liking. He chose race cars instead.

In his later years you would often find him outside on his porch swing sitting in the sun with his cats. Every summer Frank went to the races every Friday and Saturday night. In the fall he grew the best pumpkins. He loved going to his great-granddaughters’ band concerts and horse shows. Every Thursday he and his partner in crime, Joy Monroe, would go out for breakfast, rain or shine.

Frank was preceded in death by his wife of 68 years, Lois, ten siblings and his parents. He is survived by his three siblings, Cora Wegr, Joe, and Ike Franklin and many nieces and nephews from Illinois; his four sons, Edward “Butch,” Glen “Bud,” Jerry, and Charles Franklin; his nine grandchildren, including his pride and joy, Frances “Franny” and Jason Franklin; and grand-dog Jake. Frank has 16 great-grandchildren. He often referred to his most precious great-granddaughters as ‘grandpa’s girls,’ EmaLee, Ella and Rebecca Franklin. He will be deeply missed by his birthday buddy and 79th birthday present Ella Franklin.

The funeral service will be held at 12:00 p.m. on Thursday, November 19, 2020, at Robbins United Methodist Church, 6419 Bunker Rd., Eaton Rapids, MI, with visitation beginning at 11:00 a.m. Interment will take place in Greenwood Cemetery in Onondaga. In lieu of flowers, memorial contributions may be made to the Ingham County Animal Shelter. Arrangements are by the Estes-Leadley Greater Lansing Chapel.

Rest Peacefully
In Heaven Frank!
You will be deeply missed by many.
You were one of my favorite Thursday customers.

He was always interesting to have on the job and to with, especially if you wanted it done.

To the Franklin family,
Frank taught many of his fellow Iron Workers how to be a good tradesmen and to not shy away from hard work. He came from a generation that inspired many who followed in their footsteps. He was always enjoyable to be around, often sharing a story or two to lighten the mood. I had the honor of presenting him with his 30 year Iron Workers membership pin on an MSU job site where he was working for Douglas Steel Co. He told me a story back then about working on the MSU campus, that has stuck with me every since. Frank said you know that every year I work out here on the campus I get a year older and the kids that go here stay the same age, their age always stands still here and mine doesn’t!
Frank you will always be remembered, rest in peace brother.

Frank was one of the very first ironworker’s I worked with and I considered him one of my mentors as an apprentice. He always had a story to tell and I enjoyed them. We worked together for almost two years while with Douglas Steel. I will miss him greatly as he taught me much about iron work. RIP old friend. I send my sincere condolences to all Frank’s family and friends during this time of reflection.

Me and my dad always enjoyed seeing Uncle Frank at the races every Friday night.