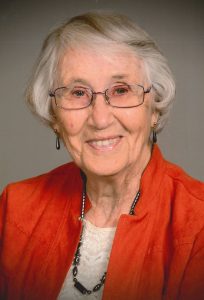 Baptized within a few days of her birth, Esther was a life-long Christian who shared her faith with others through every aspect of her life. She often laughed about how as a child she would seat herself on the bench before an old dilapidated organ stored in the barn and play “What a Friend We Have In Jesus” to her only audience, the chickens. As she grew older, her friendship with Jesus continued to grow and she found many other avenues for sharing her faith.

As a senior in high school, she was valedictorian of her class. Following high school, she left Ida, Michigan for Toledo, Ohio where she was accepted into the last group of the Army Nurse Cadet Corps and undertook her training at the Toledo Hospital School of Nursing. With the war ending before she graduated as a Registered Nurse, she decided to stay on at Toledo Hospital where she met the love of her life, Donald, a young orderly, just recently home from the navy. The two married and raised six children who still marvel over how their mother used her sixth sense and those eyes in the back of her head not simply to keep track of them but to know how to love them through all of the easy times as well as the hard times. Throughout all the busy-ness of raising a family, Esther continued her career as a Registered Nurse, caring for patients in hospitals in Reed City, Battle Creek and Lansing, Michigan; and for many years in the office of Dr. Benjamin Stone in Lansing. She was also a tireless worker in her church where she served her Lord in a number of capacities. As a member of Trinity Lutheran Church in Lansing for many years, she was actively involved in the Lutheran Women’s Missionary League, the Ladies Aid Society, and the Altar Guild; but she most enjoyed assisting in the food bank, and the making and gathering of quilts for those in need. Later, she continued her service locally at St. Luke Lutheran Church in Haslett; and also nationally through the work of Lutheran Hour Ministries for which she and Don traveled extensively.

Over the years, Esther never forgot the words of her confirmation verse: “Delight yourself in the Lord and He will give you the desires of your heart” (Psalm 37:4).  She lived this verse daily, continuing to find ways to delight in the Lord even when travel and other activities were no longer possible. Along with her love for quilting, she also had the gift of being able to knit almost anything; and so along with a group of friends in her home at Independence Village East Lansing, she knit hats and blankets for infants and new mothers. In the last months of her life, she still had a blanket on the needles and several hats going; no doubt trusting that the Lord would provide someone to finish them. And finally, even in the last weeks and hours of her life, she never stopped delighting in the promises of her God; she knew that the ultimate desire of her heart was about to be met; and in this hope it happened that even in her dying she taught those who loved her how to truly live.

Esther was preceded in death by her beloved husband of sixty-nine years, Donald Bennett; her parents, Rev. Albert and Viola Gehner; her sister, Phyllis Hedberg; and her grandson, Samuel Goodine.

Visitation will be held at the Estes-Leadley Greater Lansing Chapel on Wednesday, May 11th from 6-8 p.m.  The funeral service for Esther will be held at St. Luke Lutheran Church, 5589 Van Atta Rd., Haslett, MI 48840 at 11:00 a.m. on Thursday, May 12, 2022, with visitation one hour prior to the service.  Interment will follow in Chapel Hill Memorial Gardens.

As sad as I am for Esther’s loving family I know she lived a full life of joy with her family, her church and always had that beautiful smile each time I saw her. Her faith and love for all was infectious and you walked away knowing you had just met one special lady and we’re better for knowing her. Rest in heavenly peace. My heartfelt condolences to her entire family. God bless, Michael and Rachel Mom and Pa family.

Oh Elizabeth, my heart is filled with thankfulness and praise as I read the story of your precious Mother’s life. What a Blessing to have been raised by such an extraordinary Woman of God. I look forward to spending Eternity with her!

I enjoyed getting to know Esther through the knitting group at independence Village. She was a lovely lady who will be missed. My condolences to her family.

I remember your mom being such a special person. One of the best memories I have was when your mom and I did an impromptu skit during one of our famous youth group retreats at Chief Noonday Camp, in Yankee Springs. Your mom was to be a teen sneaking in after curfew and I was to be the worrying mother. We were given these parts just a few hours before the skit, we did not discuss our parts before the “performance”. Right at the beginning of the skit, your mom slipped off her shoes and acted like she was tip toeing into the house, she got a huge laugh. Turns out impromptu worked, because I remember us screaming at each other just like mother and daughter. Maybe I am the only one that remembers that skit, but it revealed to me why my mother worried about me. I will never forget doing that skit with your mom, she was truly the coolest.

We all will miss Esther and her kind ways and her smile. We were honored to have her be part of our family. Know that she and all of you are in our thoughts and prayers.

Friends and Family of IVEL.