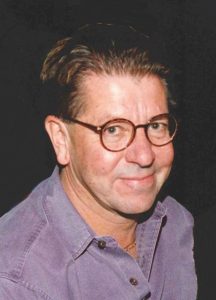 Eric often said “There is nothing more beautiful in the world than birds singing, children playing, and flowers blooming.  He loved life and lived life with a passion.  Eric often times assisted others in making life better for the people around him. He continuously made time for anyone in need and had a gift for identifying those needs. He never left any commitments unattended.

Eric graduated from MSU with a master’s in business.  His brother-in-law Max Coon called him while he was living in Connecticut with his young family, and asked if he wanted to come to work for him in Lansing, MI, at his Maxco Inc. company.   Eric agreed to join the company and moved his family to Lansing.  Eric became the COO of Maxco Inc. until he retired in 2013.

Eric was an involved member of the community and often spoke of the importance of making a difference for somebody else.  He served on the boards of Convention Visitors Bureau, CEO Circle, GLFB AD HOC, and chaired the Sparrow Planning and Development Committee. He never missed a meeting for the Lansing Rotary and sponsored exchange students on two separate occasions.  He took on the role of becoming a big brother to “little sister Satin Williams” by coaching her about life’s lessons and helped her with school assignments a few evenings around the kitchen counter.

Eric could always be seen on or near water.  He enjoyed boating from port to port, traveling with Marie to different islands, and hunting with his buddies and family at deer camp on the Thornapple River.  Eric loved to entertain with his cooking skills and disciplined himself well to “get in the gym.”

Eric was preceded in death by his mother and father; sisters, Joyce Wilburn and JoAnn Coon; brother-in-law, Max Coon; nieces, Jill Coon and JoEllen Milas; and father and mother-in-law, Norbert and Marian Pohl.

Marie and family,
We will dearly miss our kind and gentle neighbor, friend, and dog lover. We are saddened for your family’s loss of Eric. Rest easy, Eric. You have left this world a better place.
Peace and Love,
Robert and Linda

Go rest high upon the mountain Eric, for your work on earth is done. Rest In Peace. We will miss you.

Eric was a fine man and a gentle human being. I was involved with him personally and professionally and found it to be a joy and a privilege. His wife Marie is a great human being and we were blessed to be their friends. Steve and Debbie Zynda

Many, many memories some of which I can share and some which are better unsaid. We knew how to have fun – fishing, dining, traveling to big cities. I loved Eric and only regret is not seeing him in the past few years. We solved many of the world problems over a Manhattan or two. He always spoke proudly of Peter and Sally. Eric was so comfortable in the kitchen and so good with spices and sauces. Marie was his awesome sous chef. I will miss my old buddy, Eric. RIP. David Creamer

To Marie and family. Eric was truly a wonderful, loving and giving person who always made people smile. May your heart always be filled with happy memories of him. Memory eternal. Love, Ganie.

To Marie and family, Eric was a fun Neighbor and a good man. Sorry for your loss. Bruce and Sue.

To Marie and family, Eric was a great Neighbor and a fun guy. So sorry for your loss. Bruce and Sue.

God may rest your soul . You were good to many people including me.

Thank you for being part of my life.

Kiersten and I are so sorry to hear of Eric’s passing. He was wonderful man and we always enjoyed his visits to our office and coffee club. We will miss him terribly.