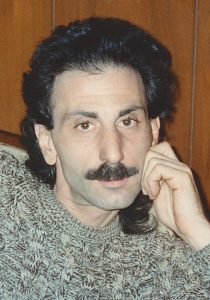 Age 70, passed away peacefully, September 7, 2022.  He was born March 30, 1952, in Lansing.  Emil graduated from Gabriels High School, class of 1970.  He played drums in several bands and had a wonderfully sarcastic sense of humor.  He was loved by everyone that knew him.  Emil worked at Emil’s Restaurant in Lansing from age 12 until 1992, when he began working at MSU for another 20 years.

He is survived by:  his son, Emil M. DiVietri, II; grandchildren, Zoe and Silas DiVietri; brothers, James (Pat) DiVietri and Steven DiVietri; sisters, Michelle (Jeff) Henning and Collene DiVietri; as well as several nieces and nephews.  He was preceded in death by his mother, Mary Donna (DeMarco) DiVietri; father, Bert DiVietri; aunts and uncles, Julie and Bob Grescowle and Ellen and Frank Fata.

Emil’s family would like to express their gratitude to the staffs at Island City Assisted Living and Elara Caring Hospice for their loving care.

Emil’s family will receive friends at the Estes-Leadley Greater Lansing Chapel from 2:00 -5:00 p.m. Sunday, September 11, 2022, where the Rosary will be prayed at 4:00, followed by eulogy from his family.  In lieu of flowers, memorial contributions may be made to Lansing Catholic High School or to St. Jude Children’s Hospital, in memory of Emil DiVietri.  Online condolences may be left for his family at www.EstesLeadley.com.

I love you Emil

Thinking of you all.

Thank you for teaching me how to drum! I’ll never forget all the laughter and joke’s while pumping out pasta at the restaurant. I’ll miss you Cuz!

my deepest sympathy to your wonderful family

So sorry to see Emil’s passing. My sympathy to all.

I have nothing but fond memories of Emil and never laughed harder than I did working the night shift with him in the kitchen back in the 70’s. Emil was as kind as anyone I’ve known.

I love you Emil!
Thank you to the family for letting us care for him. Such an honor to have had the chance to be with him. My prayers and thoughts are with you all.

I worked at island city for 4 years and he was there for two of my years at least. Such a great soul and human. He laughed constantly and made me laugh all the time as well when working. I love you buddy you were definitely one of my favorites.

I know my brothers and mother join me in paying tribute to Emil. If for nothing more than the number of meals he sat us down to eat, savor, and enjoy, his passing feels like that of a beloved family member. Rest in peace, dear friend.

I worked with Emil for a few years at Emil’s West. He was such a great person to be around and made me laugh often. I also enjoyed watching him play the drums. He will be missed by many. R.I.P.

We didnt hand around much at all , but you and your family we close to us and we loved you all. Our dads were best buddies. Bless you Emil. You are now in Gods Loving hands. This from the Keenan family. Patrick and Chuck.

I worked with Emil and knew him as a friend. Emil was always a 100% stand-up, great guy. He is already missed.

Emil was such a kind and loving person.
A very caring heart with that dry sense of humor.
I will cherish the special times I had together with him.
I thank Michelle for taking care of him.
My heart goes out to his siblings and family.
May he have the peace now that he so deserves.
If there is a band in Heaven Emil will be drumming away.

Jimmy and all the Divietri’s, very sorry to hear of your loss. We all remember the positive days in their lives when we lose a family member. I feel your pain. we are “wit u”. All the Dragonetti’s.

I was so saddened to read of Emil’s death. My sympathies to all the family. He was a very sweet man.

I loved working at Emil’s East with Emil. He was always in a good mood, joking around, and working hard. Iloked to hear him sing and play the drums. He was a great man who was fun to be around.

My sympathies to all of the DiVietri family.
I’m sure Emil will be missed by so many who loved him. I personally have such fond memories throughout the years of time spent at Emil’s East and West. May the angels welcome you to paradise.

My condolences to the Divietri Family! So sorry to hear about Emil. My thoughts and prayers are with you all.

Rest in peace, dear friend. My condolences to the family and all who knew Emil. A quick dry wit and warm smile were Emil’s calling cards.

My condolences to the family. I was sadden to learn of Emil’s passing. He was a great ray of sunshine, whom I enjoyed for many years at MSU. Praying for peace and comfort during this time.

My sincere condolences to all of you in Emil’s family and to his friends. I had the pleasure of hiring Emil back in 1992 at MSU Landon Hall. Emil had a wealth of experience from the family restaurant, cooking with his family and then at MSU. I enjoyed eating at Emil’s on Michigan with my husband, many many year’s ago. I also worked with Emil at Mason-Abbott and Owen dining hall’s towards the end of his career and at Akers when he came back as a part time on call. Emil was a very hard working, dedicated individual and always cared about the job at hand. No matter what, he met every deadline, every expectation (even when he didn’t agree- and you knew it!) and always showed up for work! He worried, worried, worried…he had a dry sometime sarcastic that also liked to create a fun work environment. Rest in peace, Emil you deserve to! god bless

Jimmy, Michelle, Colleen and Steve please except our heartfelt sympathy. Emil is gone but not forgotten.

Thinking of Emil and the entire DiVietri family. So many fond memories of Emil’s, Resurrection, Gabriel’s and the neighborhood. Seeing Emil in the halls or walking on the street was always a kind encounter. God bless!