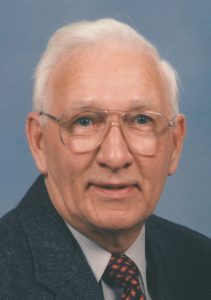 He grew up in Pontiac, Michigan, and graduated from Pontiac High School.  Al served in the Naval Air Corps during the Second World War.  He attended Michigan State University, where he received his B.S. and M.A. degrees.  Al taught school in Haslett and later in the Lansing Public Schools for 33 years, where he was president of the L.E.A.

His favorite hobby was playing duplicate bridge, which he taught for years at LCC.  He was thought of as a remarkably good bridge player.  He enjoyed his children and grandchildren, reading, working on the computer, and attending theater, especially when one of his children was in the cast.  He attended the Lansing Symphony Orchestra concerts and he and his wife traveled over most of this country and Europe.  He was a member of First Presbyterian Church, where he has served as a deacon.  At his former church, Delta Presbyterian Church, he was an elder.  Since retirement, Al has donated his time to the Lansing Food Bank and the Delta Township District Library.  He also donated 28 gallons of blood to the Lansing Blood Bank.

He is preceded in death by his brothers, William (Gloria) and Perry (Donna); sisters, Wilhelmina (Bill) Avis, Doris (Charles) Jehle and his twin sister, Elna.

His ashes will be spread in the memorial garden at Lansing First Presbyterian Church, with family attending.  In lieu of flowers, please make donations to the Lansing Food Bank or the Delta Township Library.

One Message on “Elwyn “Al” Banghart”

I am so sorry for your loss.

Mr. Banghart was my 6th grade teacher. During recess the boys would play softball and Mr. Banghart would pitch. I wasn’t a tomboy but I liked playing ball – but being a girl the boys banned all girls. However, Mr. Banghart said they had to give another girl and I a chance to play. We both made the team that day and were allowed to play ball the rest of the year. I had just shared this story with my granddaughter and the next day I saw the obituary. Mr. Banghart gave me a wonderful and lasting memory.