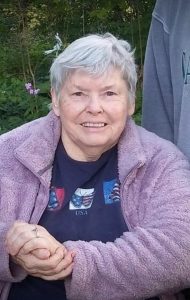 She grew up in Midland Michigan, graduating from Midland Senior High School in 1962 and married Robert on April 2, 1966.  She and her husband of fifty-six years moved to Lansing in 1970 and raised five children who survive her.  Wendi R (Scott) Pennock of Lake Orion, Amy S. (Kevin) Houghtaling of Kalamazoo, Noah M. Berger and Jared L. Berger (Toney) of Jackson, and Molly E. Berger of Elsie.

Ann loved her children, her husband, especially her grandchildren, and served in many positions at their school as they were growing up, also serving as a Cub Scout Den Leader.

She and Bob became members of The Church of Jesus Christ of Latter-day Saints on May 10, 1969 and were married for Time and for all Eternity in the Salt Lake City, Utah Temple.  She loved her church and had a testimony of Jesus Christ and His atonement and served in many positions.

Ann had several hobbies.  She was a seamstress, made many wedding cakes, baked bread, cookies, cinnamon rolls and bagels.  She sewed items for the Humanitarian Project at the Church which included newborn nightgowns, blankets and book-bags for children attending school.  She extracted thousands of names from numerous sources and submitted them to the genealogy library of the Church and traced our family tree back to the 1400s.

She loved birds, her dogs and cats, and almost everything living.  One phrase she believed in was “Service is the rent we pay for living on earth.” and she felt that she lived in a high rent district.  Ann enjoyed the election process and served as chairman of the Second Ward, 9th Precinct for many years.

She enjoyed helping others and loved her neighbors and friends.

The funeral for Ann will be held 11:00 a.m. Tuesday, June 28, 2022 at the Church of Jesus Christ of Latter-Day Saints, 5301 W. Holt Rd., Holt, MI 48842, with interment to follow in Maple Ridge Cemetery.  There will be a visitation at the church on Tuesday one hour prior to the funeral.  Arrangements are by the Estes-Leadley Holt/Delhi Chapel.

“I would rather live my life as if there is a God,

and die to find out there isn’t, than to live my

life as if there isn’t and die to find out there is.”

I remember so many wonderful times with you and your family Aunt Ann! I know your are with our loved ones in heaven and I will see you again when I get there! Praise God and our Savior Lord Jesus Christ!

Our love and prayers to the Berger Family. Ann was such a sweet, kind soul. She will be missed by many. Blessings to you all.

Ann was a beautiful seamstress! She took care in everything she did and it showed. It also showed when she was doing something in a hurry and she knew it and did not like it…so she plugged along to do it right the first time. I loved her tenacity!! When she smiled she shined from within.

Ann was a dear friend. I remember I casually mentioned I was looking for small blankets for my 4-pound Yorky, Peanut and she later gave me a bag full that she had made. I still have and use them.

I am so sad the miles kept us from seeing each other on a regular bases Aunt Ann. I never heard you say an unkind word to anyone and your smile was one of genuine love, caring and happiness. You raised a beautiful family and you were such a devoted wife! You were there for me in my times of sadness with kind, heartfelt words and prayers. I am thankful for Facebook as it made it possible to communicate with each other! Fly with your loved ones honey…only pain free happiness now and your family has the best guardian angel EVER!

Our loving thoughts and prayers continue to be with Bob and Ann’s family. Beth (Gene) Engerer & Family.

KAY IRISH
You were such a special friend. I will miss you so much. I know you have found peace and happiness and that will make my loss so much better. You were a wonderful friend and always there for me. I am sad for my loss of you but happy for your new beginning. I am sure you were one of Gods favorites in all you did for the church and anyone you came in contact with. Sending all my love.