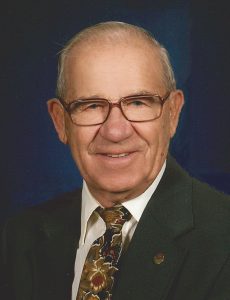 Douglas Frank “Doug” Stephens, beloved husband, father and grandfather died Saturday, November 13, 2021 following a two-week battle with breakthrough COVID-19; his wife and children at his side.  He was 95.

Born October 7, 1926 to Herbert and Betty (Cottell) Stephens, Doug was a life-long Lansing resident.  Following graduation from Eastern High School, he began a 41-year career as a USPS letter carrier interrupted only by his U.S. Army service overseas during the Korean war.

He married Anna Catherine Meyer on October 14, 1949.  Together for 72 years, they raised two children, served their church and community, and enjoyed domestic and international travel.

He had an enduring interest in sports, both as a participant, coach and a spectator, notably attending both the pivotal Game 5 of the 1968 World Series and MSU’s victory at the 74th Rose Bowl in 1988.  He especially enjoyed cheering on his grandchildren during their competitions.

Beyond family, Doug had two passions – music and tennis.  While in school he participated in both choir and marching band.  He was a life-long member of Mount Hope UMC and member of their choir throughout the majority of his adult life.  He was a founding member of the Merri-Men, an award-winning barbershop quartet active from 1951 – 1971, performing more than 650 shows throughout the Midwest over their 20-year career.  The Merri-Men were 1951 Michigan (Pioneer) District champions, then Semi-Finalists at the Barbershop Harmony Society’s International Quartet competition at Minneapolis in 1956.

Tennis was his second passion, taking up the sport in the early 1970’s and remaining active until age 88.  He medaled 9 times at Lansing “Senior Challenge” events.

He was preceded in death by his parents and sister Esma Alice Kline.

Doug was cherished by his extended family and friends and will be remembered for his warmth, generosity and kindness.  If Heaven doesn’t have a barbershop quartet or chorus when he arrives, there will soon be one.

Interment will be private.  A Celebration of Life is planned for the spring of 2022.  In lieu of flowers, those wishing to honor Douglas’ memory may do so through contributions to the Music Ministry at Mount Hope United Methodist Church in Lansing. Arrangements are by the Estes-Leadley Greater Lansing Chapel.

Doug, took me with him on his route in 1967 my first day at the South Cedar Annex. Worked beside him for many years. I went through the ranks of Branch 122, NALC and eventually became the president. We all loved to tease him about his singing. I also know he worked for Robert’s Paint Store after retirement. Last time I saw him was at Gene Holcomb’s Funeral. Rest in Peace my friend!

We are very sad to see the passage of such a nice man. Although we didn’t know Doug as well as we might have wanted, what we did know and the time we spent with him was valued. Doug’s children and grandchildren represent all he stood for and his values in life. He will be missed.

I enjoyed Doug so much during my years at Mt Hope. I particularly enjoyed the time we spent on the tennis court. Doug was such a peace-filled guy. He will be missed.

Uncle Doug you will be dearly missed. I’ll especially miss our talks about football & baseball & how you would call & congratulate my Rays on their success. Thank you for teaching me how to play Kings in the Corner while enjoying a plate full of cookies. Also, want to thank you for serving in the military to protect our country. One of my favorite memories will be going to church with you & Aunt Anna where you were honored with a beautiful Bible for your service. You are now a Guardian Angel watching over the family. Love you

What an amazing person my Uncle Doug was! He was a great Uncle, fun to be around, and he accomplished so many wonderful things in his life. He and Aunt Anna raised my two terrific cousins, David and Julie. Growing up, it was always so much fun to visit Uncle Doug and family. I have fond memories of fun times making the long distance trip to visit them or having them visit us. And while I thought I was pretty good at tennis, I’m not sure I can remember winning any games off Uncle Doug! I do remember watching him play competitive softball and him singing in the barbershop quartet and church choirs. And I always pictured him as the ideal, poster image of a USPS letter carrier, the kind that every neighborhood would want to have. A fun story, one of my close college buddies at our university in Los Angeles went on to become a doctor. While doing his medical studies in Michigan, he worked for a while in a medical office in the Lansing area. Unbelievably, Uncle Doug delivered mail to that office, recognized my friend from my description of him and had a nice chat with him! Made my buddy feel better about being so far from home (Sacramento, CA). That’s the kind of person Uncle Doug was. My wife and I always appreciated that he and Aunt Anna were always interested in how we both were doing and how our kids were doing, even though we were far apart and didn’t see each other . Uncle Doug will be truly missed. He was a special person. Our sympathies and warmest wishes go out to Aunt Anna, David and Julie and their families.

So very sorry for your loss, Dave! Difficult times for sure. Praying for comfort for your family in the days ahead.

Uncle Doug was somebody I greatly admired and looked up to. He set the bar high on how to be not only a great Uncle, but how to live your life as a kind, loving and thoughtful person. My Mom loved him dearly as we all did. I will always remember his smile and infectious humor. I will miss our conversations and his continuing interest in my life and that of my family. Uncle Doug will be sorely missed. Our thoughts and prayers go out to Aunt Anna, David and Julie.

They don’t come any nicer than Doug. He was a gentle man through and through. On the tennis court it was more fun playing as his partner than as an opponent. He played with sharp skill, keen strategy and, above all, impeccable sportsmanship. My deepest sympathy to his wife, Anna.

Anna, I was so sorry to read about Doug’s passing. I remember what good friends you and he were with my parents (Al and Dorothy Wood) and hearing about the many happy times you all had together with the rest of your circle of friends … especially the Hansens, Stuckmans, Kellys, and Sawyers. My thoughts are with you at this difficult time.

As a good friend of Doug’s son, Dave, I had the misfortune of playing several tennis matches with Dave against Doug and my father in the 1980s. Though we had youth on our side, rarely were we able to overcome the craft and guile of our fathers. Doug was a force at the net with cat like reflexes and was always magnanimous in victory.

As a father, husband and citizen, Doug was an outstanding role model to those of us in the succeeding generation. His legacy is his wonderful children, Dave and Julie, and their children. He had every right to be the proud husband, father, and grandfather he was. I will miss him.

Uncle Doug was kindly to my brothers and I growing up and visiting with my cousin’s there in lansing and will always remember his humor around us.He will be surly missed.