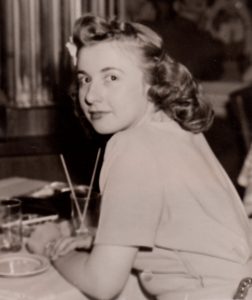 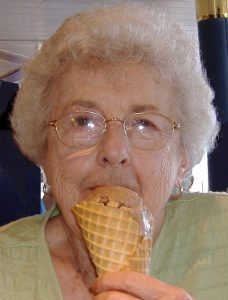 Donna Jean Riegel Bernitt was born in Ansonia, Ohio, to Olon and Mariam Riegel in 1921.  She died peacefully in her sleep at Burcham Hills Retirement Community on July 12, 2020.

Donna and her family moved to Monroe, Michigan, in 1924 where she graduated from Monroe High School in 1939.

She then attended and graduated with a degree in Home Economics from Michigan Normal College (later Eastern Michigan University) in 1943 and was married that same year to 2nd Lieutenant Richard (Dick) Bernitt, her college sweetheart.

While at Michigan Normal she was instrumental in ensuring equal treatment for an African American fellow student who was being denied the ability obtain a teaching certificate as documented in the article, “A House Undivided: Michigan Normal’s Practice House” in the Fall 2016 of Chronicle, the magazine of the Historical Society of Michigan.

She and Dick relocated to East Lansing where Dick found employment with the Michigan State University Department of Public Safety where he later became the director. Donna also worked at MSU as a dietitian at Mason-Abbot dormitory for several years ensuring that “her” students received food made with TLC.

In Lansing, Donna was a dedicated volunteer with Lutheran Women, MSU Faculty Folk, and Sparrow Hospital (on her 92nd birthday she received an award for 60 years of continual volunteering) among other organizations.

Donna was the most ardent MSU fan and from the 1950s on attended every football, basketball and hockey game while she could.   She also loved dogs and other furry things, traveling, eating ice cream, and anything that was sparkly.  Additionally, she had a love of the San Diego Zoo where you can find the Donna Bernitt bench located on the periphery of the elephant exhibit.

She is survived by her son, Captain Thomas R. Bernitt, USN (Ret) and his wife, Vicki and her brother John, nieces and nephews and their children and grandchildren.  She will be missed by her many friends, young and old.  Please honor Donna by donating to a charity or organization of your choice in her name.  Due to Covid, a Celebration of Life in Michigan may be held at a later date.  Inurnment will occur in California.  Please contact thomasrbernitt@gmail.com for more information.

One Message on “Donna J. Bernitt”

Dear Tom, so sorry to hear of your moms passing. Our thoughts and prayers are with your family at this sad time. Your mom and dad were great friends for so many years to my parents, Frank and Nancy Pellerin