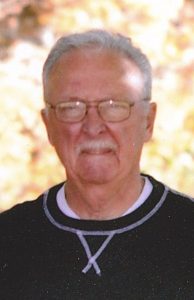 Don and his wife Adah were longtime members of St Michael’s Episcopal Church. He was a graduate of Murray State University, in Murray, Kentucky and later earned his master’s degree from Michigan State University. He went on to 40-plus years of service as a teacher, serving at Gardner Middle School, teaching math, and physical education. Don was a longtime coach at Lansing Everett High School, where he coached baseball with Jake Boss. Don’s time as a coach extended long beyond his retirement; he was a mentor to many in shooting, and hunting. He was very involved in his grandchildren’s sports, and was even known as “grandpa” by his grandchildren’s friends. Don will be greatly missed by his family, friends and the communities served for so many years.

He was preceded in death by his parents, wife of 42 years Adah G. Smith, and his grandson Thomas Waligorski.

We’ve lost one of the good guys! My deepest sympathies to Missy, Mike/Dawn, the grandkids and all of Don’s loved ones. Family was absolutely everything to Don and I’m heartbroken for all of you. Hang on to the memories and lessons he left behind. I’m pretty sure he and Tom are hunting together already and loving it!

Missy and Mike, I’m so sorry for your loss. Your Dad was a great man and mentor for so many. I’ll never forget the good ole days he coached us in cubscout softball and baseball. Family and sports where always his #1 pri and he will be missed. Hugs to you both his memories and spirit will always be with you. Our prayers go out to you and your family. Love you both

In 1978 I had to take a note to all of my teachers requesting homework for a week so I could go hunting with my family. Mr. Smith took one look at my note and asked why I needed the time off. Once I told him it was to go Deer hunting in Wyoming. He said he wouldn’t sign it….
Unless I took him with me. Lifelong memory of a teacher who cared about his students and reminded us that teachers are people too.

Mr. Smith was my first sports coach at 4.5 years old…too young to formally play or have a team jersey. He allowed me to attend every practice, game and to participate in all team events. Some 45 years later, I still have my team photo in my office to remind me that what you write upon the heart of child can never be erased. Mr. Smith taught me at a young age that I was valued/important and to always give 100% to anything I committed to.

Mike and Missy – I am praying for you and the rest of the family…this is a tremendous loss for our whole community.

So very sorry for your loss. Butch will be missed by many…