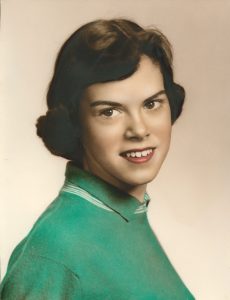 Age 80, passed away peacefully April 26, 2022, one day short of her 81st birthday.  She was born April 27, 1941, in Lansing, to Stanley and Margaret Baker.  Dianne graduated from Lansing Sexton High School in 1959, and from Lansing Business School in 1961.  After that, she married Daryl Rolfe, who preceded her in death in 1967.  In 1970, she married Gary Mitchell and they raised four children together in Williamston.  They were together for 44 years, until his death in 2014.  She worked as human resources director for a laboratory.

The funeral service will be held at 11:00 a.m. Tuesday, May 3, 2022, at the Estes-Leadley Greater Lansing Chapel, with visitation one hour prior to the funeral service.  Livestream of the funeral is available at https://view.oneroomstreaming.com/authorise.php?k=1651272796181388  Interment will follow in Delta Center Cemetery.  In lieu of flowers, memorial contributions may be made to Alzheimer’s Association in memory of Dianne Mitchell.   Online condolences may be left for her family at www.EstesLeadley.com.

I will always remember the very first time I met her and Gary when they stopped into where we worked Scott. She was so kind and sweet. I’m so sorry for your loss.

I am Dianne’s cousin on the Baker side, and we were only 2 years apart in age. We had been very close, and remained in touch even when we were miles apart. My mother, Dianne’s aunt, was afflicted with Alzheimers also, and Dianne was attentive and kind to Mom during her journey. Dianne was an incredible family force, and provided a lot of glue, especially during the tough spots. I was my joy to be associated with her, not only as family, but also as a friend.

I knew Dianne and Gary for many years as a friend, neighbor and working associate. We played cards with them for many years too.
My thoughts are with you as you celebrate her life,
Jan Mace Sollenberger

Thank you Jan. She always enjoyed your friendship.

I knew Dianne as her caregiver and she was a very nice lady and her son was a very nice man so iam very sorry for you. I care about her so much my thoughts are with you, Rosie L Davis

Thank you Rosie, she loved your company!

My sympathies and prayers for Steve, Scott, Stuart, Cheryl, spouses, and the grandkids. I will always remember Aunt Dianne’s kindness, smile, and how nice she dressed!! Also, that she shared my mom’s first and last name except for an extra “n” !
Alzheimer’s impacts so many and I would like to make a gift towards that association in her memory. God bless.

Thank you Mike. That is very thoughtful & generous of you.

I was one of Dianne’s care takers. She was my very first client when I started with the company. I will miss sitting and talking/ watching TV with her. My nickname for Dianne was Spunky,. Since Dianne was called home she now can watch over all the ones who love and miss her so very much.