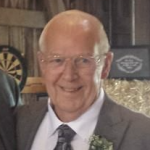 On September 1 Denver Harless, loving husband and father of five children passed away surrounded by his family at the age of 82. Denver was born on April 6, 1938. He attended Mount Pleasant High School where he met the love of his life. He  married Mary Moss on May 6, 1959 . They raised four sons, Mark, Greg, Gerry and Kevin, and one daughter, Kelly.

In 1966 Denver opened Jon’s Country Burgers in Lansing, Michigan. He spent 47 years at the restaurant, always a constant presence behind the glass window. He poured his heart and soul into the food and service at the restaurant. He loved working there and provided Lansing with countless donut sundaes and country burgers with a smile. He was an active Boy Scout leader for many years. He loved making memories outdoors with his sons and other kids in the Holt community. He was a longtime member of Holt United Methodist Church. In his retirement he became a member of the Holt Lions Club, still finding time to give back to his community. He treasured the time he spent fishing with family in Canada, and spending winters in Florida with Mary after retirement.  He was known for his quiet humor, slow smile, and love for his family.

The family would like to thank Stoneleigh Residence & Hospice of Lansing for the loving care they provided Denver and the family during his time there.

At this time there will be no funeral service. In lieu of flowers the family asks that donations be made in Denver’s name to Stoneleigh Residence & Hospice of Lansing.

The Holt Lions Club sends it condolences to Lion Denver’s family and friends. He will be missed.

To the Harless family,
The Ostrander’s want you to know we are thinking of you all during this difficult time. We absolutely adored Denver and have so many fond memories of visiting him at Jon’s. We will miss him dearly. Mary and the rest of the family, much love and many prayers.
Tracy, Lisa, Morgan, Madison and Emmy.

Sending our love, prayers and condolences to all the family from the Niblock and Elliott families.

Denver was my first boss and I worked for him throughout high school and off and on during college. I have such fond memories of him and my time there and he made a lasting impression on my life. I know he must leave such a huge void in his family. Sending love to you all.
-Kelly (Smith) Ahti

I worked for Denver from 1992-1996 at Jons Country Burgers and was my first job. He was the best boss I could’ve ever asked for. He was a second father to me. Those truly were great times. I cherish all the moments I had with Denver. Thank you for teaching me mad cooking skills and life skills along the way. He was one of the last great men. He will be missed by so many. Thoughts, prayers and love go out to you all. Love you Denver.

Denver will always be remembered for his kindness to our family as we went there to eat, or Dennis delivering his linen to run his business and Carly working all those early Sun mornings Carly and Dennis absolutely enjoyed talking with Denver and truly enjoyed his company Denver will be missed, RIP friend Karen,Dennis and Carly Morris

So sorry for your loss. Denver was one of the kindest & friendliest people I have ever known. Before I retired from LPD I would go to Denver if I needed to talk to someone. Although I retired over 30 years ago & moved out of Mich., I still think of him. I know almost all of the Detectives knew & respected Denver.

Jon’s Country Burger was both Sherry and my 1st job. We have fond memories working with Denver. He will be missed.
Thoughts and prayers for Mary and the family.

Denver was my first boss and made such a lasting impact on my life. It was him who helped shape my work ethic for the rest of my life. He was one of the the kindest, gentlest, most caring and funniest men I’ve ever known. He truly cared about his employees and his business and took great pride in his work. I can still see him leaning against the counter with his half smile saying a dry witted remark that tickled everyone around. Prayers to his family during this time, for peace and comfort for his wife, children and grandchildren.

To this day I treasure my times working for Denver. Made great friends that turned into family. My deepest sympathy and condolences to the entire family.

It was a pleasure for us to know such a caring and wonderful man. Wishing the Harless family peace to bring comfort and loving memories to forever hold in your hearts.

Mary and family.
So sorry for your loss. Our thoughts and prayers are with you.
Max and Jo Hineman

Denver gave me my first job during high school. It was a joy going into work. Denver and Mary were incredible people to work for. I have so many found memories. We had a great group of people to work with and there was always lots of laughing. My prayers for comfort are with the Harless family.

I was lucky to have Denver Harless at Jon’s CountryBurgers as my first job/ Boss (after babysitting!) He and Mary were both influential in their kindness and instructions! We learned so much and I understand that there has never been a Health Dept. violation! I enjoyed working for them very much!

Mary,
I am so sorry to read about Denver’s passing.
I worked at Jons Country Burger from 73-75