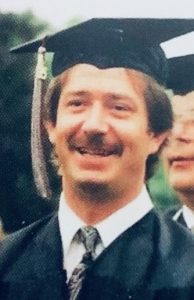 David was a proud veteran of the U.S. Navy. He later got his degree as an X-Ray Tech. which he was very proud of. David also worked at the Marketplace Walmart, where he was a dedicated hard worker for 13 years. He was an avid sports fan of MSU, Lions, Tigers, Red Wings and Navy.

He was preceded in death by his parents and his son David Sproul.

There will be a memorial service held 12:00 p.m. Saturday, June 12, 2021, at Pennway Church of God, 1101 E. Cavanaugh Road, Lansing, MI 48910, there will be visitation one hour prior to the service at the church. In lieu of flowers memorial donations may be made to the charity of the donor’s choice. Arrangements are by the Estes-Leadley Greater Lansing Chapel.

Debbie, Jim and your families:

Very sorry read that your brother, David has passed. We’re hoping that you can be comforted in knowing that you are in our thoughts today.

Thank you so much Rick and Nancy for your condolences.

So sorry to see this. David was a great guy. I worked with him at Walmart for 5 years. I am so sorry for your loss.

Will always remember you Dave. You are my very good friend and keep an eye on me up there. I need all the support I can get either super natural or just natural. Miss you my friend.