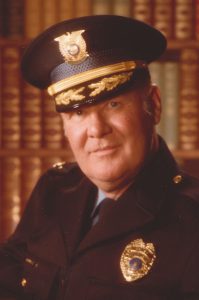 Of Grand Ledge, Dave was born on June 23, 1928 near Barryton, Michigan, and passed away on January 24, 2020. He was the first son of Manuel D. and Lillian C. Burtch. He graduated from Sunfield High School in 1946. He then joined the Navy and was honorably discharged in 1949. He married Lou Anne Potter on January 2, 1949. He joined the Lansing Police Department in May 1951, retiring as Captain of the Investigations Division in December, 1978. He then served as Chief of Police in Grand Ledge, Michigan from 1978 to 1990. Dave was a graduate of the Southern Police Institute, the FBI Academy, the Lansing Community College Police Training Program, and the MSU Traffic Engineer Course. Dave was active for many years in Boy Scouts and was Scoutmaster of Troop 193 in Lansing. He was National Jamboree Scoutmaster in 1969, and was awarded the distinguished Silver Beaver in 1979. Dave volunteered for 61 consecutive years with the Old Newsboys Association, serving as Board Member and President in 1990. He was also a life member and past President of the Central Michigan Law Enforcement Association. He loved all kinds of sports, especially hunting, fishing, golf, and even coached Little League Baseball. He spent many hours happily working in his yard and flower beds. He lived a life of faith in God and was completely devoted to his family. He was a wonderful role model and was well respected by everyone whose life he touched. His patience, kindness, and compassion for others will be remembered by all who knew him, his love and presence here will be greatly missed by his family and many friends.

Dave was predeceased by his wife, Anne; sister, Ruth; and brother, Ed. He is survived by his three children: John (Shawn), Bill (Sandy), and Susan Tabor; six grandchildren; five great-grandchildren; his sister, Virginia Hawley; and several nieces and nephews.

The family would like to thank the staff at Regency of Lansing West and Great Lakes Caring Hospice for the loving, compassionate care they gave our Dad.

The funeral to celebrate Dave’s life will be held 11:00 a.m. Thursday, January 30, 2020, at the Shepherd of the Hills Evangelical Lutheran Church, 7740 W. St. Joseph Hwy. Lansing, Michigan 48917, with interment to follow in Chapel Hill Memorial Gardens. Visitation will be 2-4 and 6-8 p.m. Wednesday at the Estes-Leadley Greater Lansing Chapel. In lieu of flowers, donations in Dave’s memory may be made to the Old Newsboys Association.

My sincere condolences to your entire family. I worked with Susan at the legislature and of course Tony worked with him at LPD.

Dave was one of the dad’s in the neighborhood that us kids loved being around. He will be missed.

He was a good man and the best father in law ever! I know that today he is with mom in heaven and I thank God his suffering has ended.

Condolences on losing the Burtch patriarch. I remember him as a great Dad to his family. I hope you find peace and comfort in your memories and faith.

Wonderful Uncle. Great man I feel privileged to have known. Loved by many.

Hi Randy. So glad to hear from you. Dad had a great life and affected a lot of people. He sure did love everyone in the family. he will be greatly missed but is with your mom, Ed and grandma and grandpa. hope things are going well for you. Bill

My thoughts & prayers are with you & your family, John. I’m so sorry for you loss.

Chief Burtch hired me in 1986. Had the pleasure of working under him for 4 years. I remember him as always in a good mood and a pleasure to be around. He was like a grandpa to my kids when they came to the department to visit. Only got his wrath once when I damaged a patrol car due to my carelessness. It was brief and then back to the nice guy he was. Rest in Peace and love Chief, you deserve it.

Chief Burtch was a tremendous mentor to me, for 12 years while at GLPD, and beyond. He believed in me, and took me from the GLPD Auxillary ranks, to FT. You couldn’t ask for a more caring person, devoted, and distinguished example, of a police commander. If you were wrong, he had his way of letting you know it. But, if you were right, you couldn’t have a better person in your corner. My thoughts, prayers, and condolences be extended to his family, and all that knew “Chief.” Chief Burtch created a legacy for so many. May he Rest in Peace, and know there are many that will honor his life.

I offer my heartfelt condolences to Dave’s family. I am very saddened to learn of his passing. I knew Dave while he was the Grand Ledge Chief of Police and I served as lieutenant in neighboring Delta Township with the Eaton County Sheriff Department. I had frequent contact with Dave in our professional roles and some social gatherings as well – including at least a couple of rounds of golf. He brought his experience and skills to the job as Chief and made a positive impact on everything and everyone he encountered. He was a great role model and teacher for the young officers at GLPD. He was passionate about his service to the citizens of Grand Ledge. He enjoyed life and it showed when he played golf – a good golfer who never took it so seriously as to forget how fun it was, and always respectful, courteous, and supportive of his golf mates. He was a true gentleman and I’m honored to have known him.

I worked with Captain Burtch for many years. He was the nicest and kindest person I ever met. He will be missed. Condolences to hos entire family.

One of the finest men I could have worked for. I learned so much and I tried to copy his style of leadership in my career. I’m grateful to have known Chief Burtch. Joe Brown

Bill and sandy, sorry to hear about your dad’s passing. Clarence and. Del

Bill and Sandy so sorry for your loss, I enjoyed working for Dave a great man. Betty and I will have you in our prayers.

As a long time member/officer of the Old Newsboys and CMLEA, I knew Dave for many years. Am saddened at our loss of such a dear man. My heart reaches out to his family. May the many endearing memories comfort you at this time.

He was a wonderful Boy Scout leader. An important man in my life.

Great to hear from you Dog. Its been many years. So many fun times in scouts. we were kind of the bad boys but we also got the most out of our experiences. Dad loved remembering those days. Take care Bill

One of the very finest people I ever worked with. Prayers and thoughts for the family.

In January of 1980 Chief Burtch hired me as one of his officers at Grand Ledge Police Department. For the next ten years he was my boss and mentor until he retired. I will forever be grateful that he gave me the opportunity to have a career in law enforcement. He was a man of the highest integrity and the world has truly lost one of its best. He’s back with Anne now. God speed.

Hi Don. Thanks for all you have done for my parents thru the years. You were definitely one of my dads favorites. Dad had a great life and connected with so many people its hard to believe because to us he was just dad. Stay well and thanks again. Bill

Bill and Sandy, sorry to hear of your dad”s death. My thoughts and prayers go out to you and your family.

Bill: Bob has always spoken of your dad hiring him at LPD and has never forgotten his kindness. Love to you and your family. May your father Rest In Peace !
Bob & Teresa McClean

He was a very nice man, loved his family and always was a gentleman. He will be missed, May he Rest In Peace. Judy Augenstein Gee and Dewaine Gee

He was such an amazing grandpa and dad, and I really wish I would’ve had the opportunity to know him better. He will live on through the wonderful memories that he created with his family. I’m so glad that Aaron and I decided to get married at his assisted living facility so that he could be a part in our special day because he meant so much to him. When we were visiting grandpa Dave recently, one of the nurses told us a story about how Dave stopped at the scene of an accident years before, after he was retired. He waited with the young driver until help arrived. That young driver was the nurses son and now all of these years later she was able to repay Dave’s kindness by taking care of him. You will always be remembered. Rest in Heaven.

Thinking of the family and wishing them comfort and strength. Dave was a fellow resident of Recency. Rest in peace Dave.

So sorry John, Billy, and Sue and families. All who knew him feel your loss. My time in Boy Scouts was probably the most important (and fun!) time of my younger days. Dave and the other fathers gave a lot of their free time for us to be the most active troop I’ve ever heard of. He also wrote a recommendation for me that I’m sure helped me get hired at the LFD, making my career there possible. Thanks, Chief Burtch.

Hi Mike. Great to see your comment. Amazing how my dad affected some many peoples lives. what we learned in scouts and from my dad carried us to serve the community and to have great lives. That was his gift to everyone he touched. Hope retirement is going well. Thanks again. Bill B.

My thoughts and prayers are with the family. I got to know Dave when my mom was a resident at Regency.

Regretfully, I wish that I had taken the opportunity to tell Uncle Dave how much I appreciated the example he set and lived about being a good father and a good man…he always had my utmost respect and admiration as a boy growing up finding my own way in this life which seems so short…I can only imagine the hug and reception from Mom (Ruth)!
You earned the rest and the peace!
Bob(by)

Wonderful to hear from you Bob and family. Dad had a great life and sure was proud of you! I know your mom, Ed, and Grandma and Grandpa were waiting with that Burtch smile and with open arms to greet him. It had been a rough last couple months so he has found peace and happiness once again..Hope things are going well. You ever get up this way please check in with us. God Bless you and your family. Bill & Sandy and all our family.

Our condolences to Chief Burtch’s family. My grandpa, Bill Zimmerman enjoyed his daily McDonald visits with the Chief. Now the two of them can go back to visiting.

He was a cool guy and we were glad to know him.

To the Burtch and Tabor families: From the entire Bill Barnes family please accept our sincere condolences for the passing of Chief Burtch. Chief was always kind to my family me during and after my seven years at the GLPD.