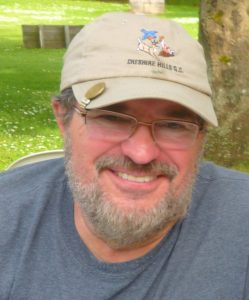 Dave, age 72, of Holt, MI, died unexpectedly Saturday, July 11, 2020. He was born July 25, 1947. He is survived by his wife, Connie (Bourque); his children, Keri (Jason) Mertens, Scott, Laura (Mike) Fox; his grandchildren, Quentin, Eli and Oliver Mertens, Luke and Harley Fox; his brothers, Frank (Jill), Jim (Michelle), Gary, and Dan; his sisters, Karen (Joel) Ledford and Kay (Mike) Tappy; and numerous nieces, nephews and in-laws.  He was preceded in death by his son, Darren; his parents, Lowell and Mildred (Kupres); and his brothers, Roger, Dean and Joseph.

Dave and Connie were married for 45 years. They lived in Lansing before moving to Holt in 1986.  Dave served in the Army during the Vietnam War.  After working for the US Postal Service for 37 years, he retired in 2008.  He volunteered for many organizations over the years, the latest being the Give-a-Kid Projects in Holt, where he was Treasurer.  He was always willing to help family and friends. Golf, bowling, flying small aircraft, riding his Harley motorcycle, and watching MSU sports were favorite pastimes.

A private family graveside service will be held at St. Joseph Catholic Cemetery. In lieu of flowers, donations can be made to the Give-a-Kid Projects, P.O. Box 576, Holt, MI 48842, in memory of Dave Kelly.

We are so sorry to get this news. Dave has always been a kind friend and neighbor. Our hearts are with you, Connie and kids.

Our deepest condolences going out to the entire Kelly Family. May David rest in peace. Sending lots of love and prayers.

So sorry for all of Dave’s loving family. I will miss his friendly attitude, but not nearly as much as Connie, Kerri, Scott, and Laura.

So very sorry to hear about Dave. Thoughts and prayers for the family.
Sincerely,
Bill & Ruth (Baker) Kaye

We are so sorry to hear of Dave’s passing. Our thoughts and prayers are with all of you.
Steve & Kim Grafuis

I am so sorry for your loss. We will keep your family In our prayers.

Our deepest sympathy to all the Kelly family.
Love and prayers,
John & Bev (Bourque) Proulx

So sorry to hear of Dave’s passing. He will be sorely missed by many. R.I.P. Dave.

Dear Scott and family…I am so sorry to hear of your loss. May you be comforted knowing others care. You have our sincere prayers

So very sorry about your Dad, Keri and Jason. My heart goes out to the whole family. God’s Blessings!

Our thoughts and prayers go out to connie and her children. I met dave through my wife sue when he pressured me to join his bowling team. It was the start of a great friendship. We will remember dave for how proud he was of his family and his military service. He was generous, dedicated to family and various charities, competitive on the lanes and links and had a great sense of humor. Connie mentioned that his final round of golf was played with me. I will cherish that day for the rest of my days. RIP and GO GREEN daveyboy! We will miss you.

David was a Great Friend and a Truly Good Person. I will always have an empty spot in my heart for him. God Bless him and Connie and the rest of his family. I will always cherish the memories of the good times we had together.

We are so sorry for your loss. May God give you comfort during this difficult time.

Condolences to the Kelly family. My thoughts and prayers are with you. May he Rest In Peace.

We are so sorry to hear of Dave’s passing. Hoping you will find comfort and peace through the love and consolation of all who care about you. We want to share our deepest sympathy to you and your family.

Our condolences and prayers to the Kelly family and to all who knew and loved Dave.

Our thoughts and prayers are with you and your family

I was saddened to learn of Dave’s passing. We knew him from the USPS and always enjoyed his humor and great smile. Prayers for Gods peace for each of his loved ones. May you be comforted by family and friends as you share your wonderful memories.

Oh, Connie, we’re so sorry to see this. Our thoughts and prayers are with you and your family. God bless you all.

I miss my Uncle Dave. I have so many stories which show how kind, generous and giving he was. My favorite was when he flew me to Newberry and as he was being granted permission to land at the Luce County Airport he was talking with the air traffic controller with a very noticeable “yooper” accent. I was absolutely shocked at how noticeable the accent was and having been born there and grownup there became concerned that I sounded that way to others. After their conversation I meekly asked my Uncle Dave whether I talked like that too. He started roaring with laughter and told me, that I didn’t sound like a yooper. He then proceeded to tell everyone one he came into contact with for the rest of the day about the question I asked. Much to my embarrassment.