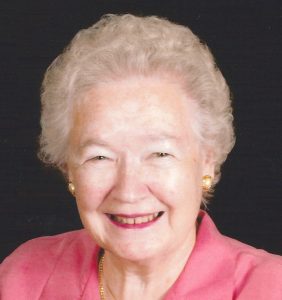 Daisy DeHaven, of Lansing, whose passion for quilts was surpassed only by her passion for her family, died Wednesday, January 8, 2020. She was 92. Although Alzheimer’s had stripped her of many memories, Daisy still knew her daughter Dusty, her son-in-law, two granddaughters and close friends. She retained her smiling, cheerful personality until the very end.

Daisy was born on April 23, 1927, the oldest of 10 children, near Porter, West Virginia, in a home without running water. She was blessed to have a teacher, Mrs. McCune, who took her under her wing and let her live in her house during high school and encouraged her further education. Following high school, Daisy attended Mountain State Business College in Parkersburg, West Virginia, earning an associate’s degree. Her work took her to Washington, D.C., where she served as an assistant manager with the U.S. Chamber of Commerce Institute – at the time, one of the highest positions for a woman in the Chamber.

There was a marriage, too, and although it ended, Daisy got the best part of it, a daughter, Susan, who eventually would take on the nickname Dusty. Her daughter was the first true love of Daisy’s life. The second true love, Clark E. DeHaven, arrived on the scene a few years later. Daisy and Clark married in 1964 and moved to Lansing, Michigan, where they built a beautiful life together for nearly 40 years, until his death in December 2003.

Over the years, Daisy and Clark traveled the nation and the world, entertained friends and colleagues and doted upon Dusty, whom Clark adopted as his legal daughter. While Clark tended to his more than 100 rose bushes – he always said he loved his roses, but he cherished and adored his one Daisy – Daisy found a new hobby, quilting. Daisy’s house was filled with quilts, quilting books, quilting magazines, quilting knick-knacks and enough fabric squares to cover the entire neighborhood. A sign in the back window of her Cadillac read: “Warning – This car brakes for quilt shops.” Daisy regularly hosted meetings of her “Six-Pack” and Charm Group; her quilting friends sustained her.

Daisy also was active in First Presbyterian Church of Lansing, where she served at various times as a deacon, elder and Sunday School instructor and helped lead youth trips across the country. She loved her church family.

Daisy is survived by her daughter, Dusty DeHaven, and son-in-law, Tim Makinen, of Lansing; two grandchildren, Emilie, of Kalamazoo, and Rose, of San Diego; and other beloved family members.

Daisy’s family would like to thank the staff at Rosewood AFC in DeWitt, where Daisy spent her final years. The Rosewood staff treated Daisy like a member of their own family.

Thinking of you, as you remember your mom and precious moments shared. Sending healing prayers and comforting hugs. I am so sorry for your loss.

Oh my–my eyes filled up as I read this lovely obituary! Dusty, please accept my heartfelt condolences. Daisy was a lovely lady and I cherish memories of her.

Dusty,
I never met your Mom but through her quilting (and fabric) I can imagine a bit of her creative spirit. God bless you during this time of change in your life.
Debbie Viele

Dearest Daisy – thank you for hosting numerous quilting potlucks and for our many, many shared trips to quilt shows, quilt retreats, and fabric stores. I cherish the memories of sitting and sewing with you and our quilter friends. Much love, Ruth Dukelow

Remembering how you’ve always talked about your mom in the loving way. God bless.

Dusty, thinking of you during this challenging time. Miss Daisy was such a gentle sweet soul, and I know you have wonderful memories that will make you smile all the way to your heart. You, Tim and the girls are in our prayers.

We are truly sorry for your loss. Bill and I would like to offer you and your family our deepest and most sincere condolences and may the soul of your mother rest in peace.

Beautiful obituary. It reads like a wonderful novel of her inspiring life.

Daisy was truly one of the sweetest, kindest, most special people I have been blessed to know. Dusty, my heart goes out to you and your family as you go through this time. It is so so difficult but memories will bring you peace and help you through. My love to you~

Dusty, your mother’s sweetness is in her picture, and your love is in her obituary. Bless you and everyone who loves her.

Daisy was such a sweet and kind person. Her long and very well lived life had many highlights marked most of all by her boundless love for Dusty, Clark, and her adoring family. Our community is richer because of the warmth she shared so generously.

Daisy was a second mom to me. She and Clark took me on many of their trips. My heart goes out to you Dusty your mom was a truly a wonderful, strong and caring woman!

Dusty my thoughts and prayer to you and Tim and the girls! What a wonderful tribute to your Moms life. Aunt Daisy always had such grace. If I remembered anything growing up when you guys came in for visits it was the love your parents had for you and the love you had for them. It was all smiles all the time! Love ya!

Dearest Dusty, I see you as I look at the picture of your mom. She sounds like a wonderful women just like the beautiful daughter she raised. She will forever remain within you. Wishing you all the best always, especially as you celebrate your mom’s life. Big hugs and lots of love.

What a beautiful and heart glowing sharing of her life, one that brings her being up exquisitely. Such a life, and you feel it through every word and image. Much love to you,

So many nice memories of Clark and Daisy especially during all of those NACUfS years.

I had the pleasure of meeting this sweet lady while a neighbor of mine was at Rosewood. Daisy was always smiling and sweet. May your cherished memories of this beautiful lady bring you comfort and may knowing that she is in God’s loving embrace give you peace.

Daisy and Clark were two people who made my life better. Both have been in my prayers for years. While I am sadden by their departure, I rejoice in their good fortune of being together again and residing in a place where neither would choose to come back from.

Rest In Peace Daisy. Hug Clark for me.

Dear Dusty and family,
I still get weepy when I think of our loss as a family but I believe her soul is now free to join others she also loved and who loved her. This obit is a wonderful tribute to her long life. Aunt Daisy was special in every way. I learned much about how to navigate my adult life from her. We were all blessed by her presence and love.