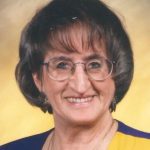 Cora Agnes Hughes passed away in Lansing, Michigan, on March 14, 2020, at the age of 84.  Cora was born on January 8, 1936, to Wilbur and Marie Beatrice (Shafer) Fields.  She worked for the State of Michigan, primarily in the Department of Education until her retirement.

Cora enjoyed drawing, painting, and decorating her home, as well as watching the various wildlife living on the lake outside her back door.  She also enjoyed spending time with her best friend, her miniature poodle, Mitzi.

Services will be held at a later date.  Those who wish may make a donation in her memory to the charity of their choosing.

5 Messages to “Cora A. Hughes”

So very sorry for your loss, Debbie. Lifting you in prayer!

Diana, I am so sorry for your & your familys loss! You are in my thougjts and prayers!

I am so sorry for for your loss. Hang in there it takes time but it does get a little easier with time, faith and the strength of family. You will all be in my thoughts and prayers.

Thanks Grace. I know you have been through loss as well.
Thanks Janet. I remember when your lost your grandmother and when you lost your mom. Your words are encouraging.

Cora has been in my thoughts and prayers so much. I would visit with her weekly and we’d laugh and sometimes cry just chatting about life. She was always encouraging me and I her. She was so strong and empowered me to always strive for the best for myself and my kids. She shared a lot of memories of her life’s journey with me. I’m very grateful for the times we shared and feel honored to have known her. Thank you for your friendship and grace, Cora. Rest In Peace.