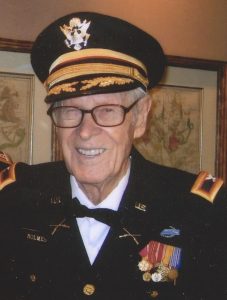 Colonel Holmes retired March 31, 1975 after serving nearly 40 years in the U.S. Army and the Selective Service System. During this period, he attended West Point Preparatory School, was selected to the First Infantry Officer Candidate School, Command and General Staff College. He was the recipient of the Legion of Merit, Bronze Star, Combat Infantryman Badge, among many others medals, and served on the Honor Guard. After retirement, he graduated with honors from Northwood University. He was known to have been both humorous and serious. He loves most sports and was an avid golfer.

Colonel Holmes was a long time member of the Holmes Road Church of Christ and served as Deacon. Prior to this, his service to the Lord began as a charter member of the Judson Memorial Baptist Church at the age of 15. He was also a member of the Boy Scouts, Troop 32, the Lansing Boat Club and volunteered for several organizations including meals-on-wheels and the Battle Creek VA Hospital. He was a member of several military organizations, including the Retired Officers’ Association, Michigan National Guard, World War II Memorial, Reserve Officers Association of the United States, Military Officer Association of America, Fraternal Order of Eagles, Veterans of Foreign Wars of the United States, Officers’ Open Mess Camp Graying, and Michigan Christian Youth Camp.

My condolences to the family of Colonel Gilbert Holmes. I remember him from back in 1970-1973 at Selective Services where I worked as a student while still in high school. I always remembered him as a very nice man, and obviously for me to remember him he had to make an indelible impression on me as a young person. May he Rest In Peace.

Rest In Peace Gilbert. You lived a great life.

Hi and condolences to the family.

My name is Dave Cushion and my Mother was Colonel Holmes secretary at Selective Service for several years. We lived on Johnson Ave then and all she had to do to get to work was walk out our back yard and into the parking lot.

She always referred to him as Colonel Holmes and never by his first name. She really respected him.

As she was an avid and very good golfer, she mentioned on a few occasions that her boss was a member of both Country Club of Lansing and Walnut Hills… very rare. I am wondering if that was your Dad. I was a member of Walnut Hills for 32 years until it recently closed.

Anyway, I am glad I saw this as I heard about him on so many occasions.

Best wishes to the family.

Thank you * Dave. And yes he did belong to the clubs you mentioned. Beanie his daughter

Our sincere sympathy to you and your family, Beanie. What a wonderful life your father lived.
Our love and prayers are with you all.

R.I.P Col. Gilbert.
Thank you for letting be one of your care givers. I will miss watching football and baseball and family feud with you. I will miss you dearly. You were a great and understanding person. God needed a Great Colonel for his army and to be with your love ones.
God bless

We offer our condolences to you Trudy, and Beanie, and to both your families. Please accept our love and prayers at this time.
Sara and Tony Tauer

I feel honored to have met Gilbert, and to have him share his experiences and the things treasured by him.

We knew Gilbert from the Sam Corey Senior Center where he was a member and enjoyed many activities. He especially liked listening to music and dancing. He was quite the dancer and always on the dance floor, whether it was at the Monday evening music jam, at the center, or at The Polish Hall. A special celebration was held for him on his 100th birthday where he received special honors and July 20th was officially named “Gilbert Holmes Day” in Delhi Township. His caretaker, Carol, had a special quilt made for him that showed him throughout his life, for the occasion. He was a Colonel in the military and deserved all the respect that was shown to him. It was an honor and a privilege to know him, as he was the perfect gentleman. Rest in Peace, Gilbert. Our condolences to his sister, Ellen, and his entire family.

Thank you very much, Sara and Tony. love, Trudy

Rest in peace, dad. I know you are now pain free and out of your misery. I know that you are now so happy and healthy and young and with mom and Brenda and all the other loved ones who have already passed. I’ll be seeing you again someday. Love, Trudy (Holmes) Jackson, 2nd daughter.

I was sorry to learn of Gilbert’s passing just today. I was honored to meet and interact with Gilbert a few times over the past several years through the Sam Corey Senior Center and the Holt-Delhi Historical Society. We were glad to have had him participate in our 2015 celebration of World War II veterans in the community and feature him in the subsequent documentary “In Their Own Words” that was produced.
Gilbert graciously supplied a copy of his life story/autobiography to the historical society which we now proudly keep in our library.
Sending my sincerest condolences to the family and thinking about the long and remarkable life lived.