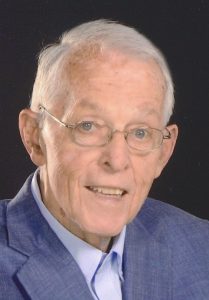 Bob attended Eastern High School from 1951-1953. While at Eastern High School, he earned seven Varsity letters and was captain of the Varsity baseball team for two years. In 2016, he was inducted into the Lansing Eastern High School Athletic Hall of Fame, an honor which meant a great deal to him.  After graduating from Lansing Eastern, Bob attended  Michigan State College. In 1954, he left MSC when he signed a professional baseball contract as a left-handed pitcher with the Milwaukee Braves (now Atlanta Braves).  Unfortunately, his baseball career ended abruptly when he injured his shoulder.  Following his baseball career, Bob returned to Lansing and played basketball for ten years in the city
league, winning several State championships. In 2018, he was inducted into the Greater Lansing Area Sports Hall of Fame, another honor of which he was very proud.  After his baseball career, Bob was employed by the Lansing Board of Water and Light for ten years.  Eventually his career switched to education sales. Bob retired from MPI (Michigan Products, Incorporated) after 41 years as Executive Vice-President and Sales Manager. Bob was member of the South Lansing Rotary for many years and served as President 1983-84. He was also named a Paul Harris Fellow by the Rotary Foundation of Rotary International.  Bob genuinely loved people (especially children) and considered anyone he met a friend. He developed lasting friendships with people he met through work, travel, and in the many communities he and Gloria lived throughout their marriage. Bob loved to talk about his many life experiences and his friends often heard his favorite stories many times. He also loved to tell children stories and even accompanied his granddaughter to kindergarten on one occasion to read her favorite “big” book to her class.  Bob and Gloria were fortunate to be able to travel throughout the United States and visit many countries after retirement. During his long illness, Bob enjoyed looking at their many travel albums and reminiscing about all the things they saw and the people they met. He especially liked to point out to visitors a map of the world on his wall with red pins marking all the places he had visited.  Bob was a man of faith and attended Presbyterian churches in Lansing and Holt before joining the St. Luke Lutheran Church of Haslett.

Special thanks to all Bob’s “family” at Robinwood Landing Alzheimer’s Special Care Center and to Hospice for their compassionate care.

The funeral service will be held at 11:00 a.m. Thursday, July 22, 2021, at St. Luke Lutheran Church, 5589 Van Atta Road, Haslett.  Interment will follow in Evergreen Cemetery.  His family will receive friends at the Estes-Leadley Greater Lansing Chapel from 4:00 to 7:00 p.m. Wednesday. There will be a luncheon after the burial, at The Fenner Nature Center Pavilion, at 2020 E. Mt. Hope AVE, Lansing, MI 48910. In lieu of flowers, memorial contributions may be made to St. Luke Lutheran Church or 2021 Walk to End Alzheimer’s in memory of Charles R. Stragier.  We also ask everyone to do a “random act of kindness” in memory of Bob.

Although I’ve only known Bob a couple of years he became a great friend. I will miss his friendship and baseball stories whether true or not! Rest In Peace, Bob. My condolences to Gloria and the rest of the family

Where do you start when it becomes about Bob. Love, respect, kindness and his smile. He will be missed, but I have so many wonderful memories. Love you Bob and as usual you gave it all you had. Rest in piece. Doug and Sally.

We had the honor and pleasure of meeting both Bob and Gloria in their retirement life city of Venice FL. We enjoyed countless hours of fun and laughter with them and spent happy times in their Spartan man cave in Venice. Enjoyed our yearly birthday celebrations in Frankenmuth also. Bob always had a funny story to tell. He was such a joy to be with. We will surely miss him and send our thoughts and prayers to Gloria and the family at this difficult time.

Bob became a member of our family a long time ago when he married my beautiful sister, Gloria. He fit right in to our loving, but complicated family! I Love you Bob and you will always be a strong part of our lives. Although you won’t be here physically to tell you how much we love you, you are always going to be in our hearts. Thank you for being you!

What a blessing to have Bob and Gloria part of our lives for many years. We will surely miss this wonderful gentle man and his many stories. We can just hear him saying “OK Gloria, this is where you come in” to finish one of his great tales for him. Dear Gloria, may God give you comfort and peace at this sad time.

Bob was a really nice guy and pleasant to visit with
. However I still have some bruises that were inflicted by Bob in our city basketball days. RIP

What great fun memories we have with Bob and Gloria. We sure lucked out with our blended families. Bob will be greatly missed but never forgotten.

We have fond memories that goes way back a few years (North Presbyterian Church) but remember many fun times with Bob and glad to call him a friend. We extend or deepest sympathy to the Stragier family.

I have only fond memories of Bob when he lived at Robinwood Landing! I fell in love with him the first day he arrived! On behalf of all our Robinwood staff, we will grieve Bob’s passing, as he was loved and adored by us and our residents! May God watch over his loving wife Gloria! Blessings.

Basketball at the Y. So many great memories.
Thanks Bob

My heart goes out to you. May your memories of Bob carry you through these tough times. Tim Currin

Gloria,
We are out of town this week and just read about Bob, We did not know him long, but his warm smile always made Sunday mornings a little brighter. Our whole family sends you love, hugs and prayers for comfort. God bless you.