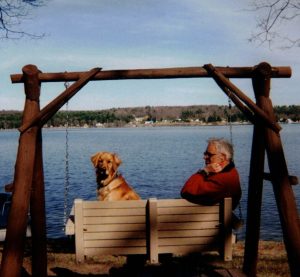 Charles attended Lansing Eastern High School and graduated in 1952.  He went on to obtain a bachelor’s degree from General Motors Institute and after graduation was employed by Oldsmobile in the Car Distribution Department.  He retired from Oldsmobile after 35 years.

In his leisure time Charles continued his lifelong passion for fishing.  He also enjoyed duck hunting, bowling and golf.  He was a member of the Oldsmobile Outdoor Club and Ducks Unlimited.

After retirement Charles spent many happy times with his wife Sandra and their beloved Golden Retriever Jacie at their cottage on Otsego Lake.  They also enjoyed attending the local casinos and dining out.

Charles is survived by sons Dana (Laura) Hargitt and Jeff Hargitt, grandchildren Curtis (Christy) Hargitt, Jarah Hargitt, David Hargitt, and great-grandchildren Caden and Connor Hargitt.  He is also survived by his sister Roxy (John) Corse.  He was preceded in death by his wife of 63 years, Sandra, brother Mark and his parents.

A gathering of family and friends will be arranged at a later date.

Sending special thoughts and prayers to you, Jeff, for the loss of your father. A very difficult event during unprecedented times. May you have peace in knowing that your dad is no longer suffering. I am sure he will be missed by many. God Bless.

I’m so sorry for your loss; my dad so enjoyed their monthly lunch gatherings (as did I). My thoughts are with you.

Dana, Sorry to hear about the loss of your dad. It’s never easy. Hope you are well.