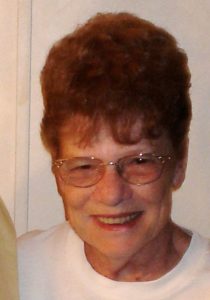 Carrol Hanner, a life-long resident of Michigan, 82, passed away peacefully on Sunday, October 27, 2019.  She was born on January 8, 1937, to Harriet Dickerson Brace Bowes and Orval Brace.  Her father passed away at age 5; she was the youngest of four children, and then two younger half-sisters whose father was Robert Bowes.

Carrol was a daughter, wife, mother, aunt, grandmother, great-grandmother, co-worker and friend.  Throughout her life, these roles in her life brought her the most joy. Carrol married her high school sweetheart, Lowell Ranshaw and they had three girls: Gail, Pam, and Teresa during the 1950s.  She lived in Bell Oak, Charlotte, Holt and then Mason.  Carrol worked at Sears with Evelyn Dow who became her best friend.  In 1973 she married Jerry Hanner and together they built a very happy and loving life for 42 years.  Carrol liked funny movies, joke books, Judge Judy and anything else that would make her laugh. She spent the summer working in her flower gardens and driving her riding lawn mower well into her 70s.  Carrol liked shopping at the junk stores and the dollar stores.  She also really, really liked going to the Casino.  Unlike others, she won a 2017 Cadillac as well as multiple jackpots over the years!

Carrol grew up playing with her brothers and sisters and cousins on News Road located off Lansing Road near the old Don’s Windmill Truck Stop that is still there.  In those days, kids scurried off to play baseball or marbles or any other game they could make from sticks and stones, old clothes, or brooms-turned-ponies.  Carrol’s brother Dick taught his youngest sister to never back down from bullies or scuffles and to hold her ground around the kids in the neighborhood and at school.  She did just that, Carrol was brave and ready…for life.  They swam and jumped off bridges at the Grand River in Dimondale and the Billwood gravel pits.  Her brother also taught her how to wiggle her ears.  She just recently showed off her skills in a video!  While in high school, she rode the bus to and from her first job at Neisner Dime Store in downtown Lansing near the Gladmer Theater.  Throughout her adult life she and her sister Lois visited often while their children played together.  She loved to laugh.  One of her fond memories was the trip to California in 2016 with her brother Bob, to see her older sister Lois.  Bob teased Carrol about all the zippers she had with the many compartments of her purse.  He had a miniature notepad in his shirt pocket where he noted any infractions she made during their journey. It was fun.

Her life was made full by time spent with her family and a few others she spent many hours with: Shelby, MaryJo, Jeanne, Sue, and Irene. Carrol’s laughter, love and wit will be missed; heaven has gained a kind soul.

A memorial service will be held at 10:00 a.m. on Saturday, November 2, 2019, at the Estes-Leadley Holt/Delhi Chapel. Inurnment will follow in Maple Ridge Cemetery, Holt. Her family will receive relatives and friends beginning at 9:00 a.m. on Saturday at the funeral home.

I will always remember Aunt Carrol’s joyful laughter and friendliness. We will miss her!
Melanie Brace

My Thursday mornings will never be the same. I would do her hair and we would watch the Andy Griffin show and laugh at Barney. We would talk about our week and our problems. Every time I eat an M&M I will think of you. You will be greatly missed…Love you…Irene

Carrol Hanner was a delightful person. I met Carrol 45 years ago through her daughter Gail, and in all of that time, I don’t remember a single meeting with her that I did not laugh and enjoy myself. Carrol had a way of making me feel comfortable and cared for. She was always laughing about something in the present, or remembering something hilarious from the past. I also remember many home cooked meals around her table where there was always room for one more. I will always remember her hospitality, her kindness, her love of flowers and the sound of her laugh. I will miss Carrol but I imagine that she is laughing wherever she is with Teresa, Jimmy, Lowell, and the rest of her gang.

From the minute I met her Carrol took me into her family and made me feel welcomed. We spent many hours sitting at her kitchen table, deciding what chocolate we should eat, and laughing. I will truly miss her. After all, I was her favorite daughter in law! I miss you mom. Love you. Mary Sanchez

A Mom is always a girls best friend. May your hearts always be filled with wonderful memories of joyful times together as you celebrate a life well lived . You were the SUNSHINE in many peoples lives. Love you and miss you friend. SHINE ON.

Gail is a dear, sweet friend of mine. I am so sad for this loss – it is tremendous and deep. I am sending much love to Gail and her family – all who loved Carrol and all she loved. Live every day with grace.

Mom,
What a precious blessing you have been in my life. I will miss you beyond measure. My heart has broken, but first it was made full by your love, kindness and patience. Thank you for your understanding and your willingness to see me, be with me and reflect with me as we examined so many things. It was fun….and you are-were a genius! I love you.

Gail, one of my best friends, I send peaceful thoughts and all my love from Germany.

It was a Treasure to have such a wonderful friendship with Carrol. Our friendship came about over 45 years ago, and has grown stronger with each year. I treasure the times spent with her and Jerry and Lowell, as we did many things together, We had bikes we rode around Holt, Many days just visiting, A trip to Albuquerque to Surprise Gail. It was priceless to see the look on Gail’s face when she saw us. Bless Mary’s “Little white lies” To Gail, so we could all pull this off. Carrol started a tradition of cooking a Thanksgiving Dinner every July. Wow that was really something. Who wants to bake a Turkey in July, Carrol! We all looked forward to it., There are so many Precious Memories of times together. Rest easy Dear Friend. I am sure The Reunion with Jerry and Lowell, and Teresa, Jimmy, and Baby Evan was Glorious. Since Jerry and Lowell worked for so many years at the Bakery, I am sure God has Tasked them with Making Angel Food Cake. Enjoy!

I am so sorry to hear if both Carol and Jimmy.