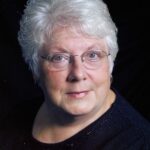 Age 79, passed away April 23, 2020. She was born August 28, 1940, in Walled Lake, Michigan, to Lloyd and Margaret Spicer. Carolyn earned her degree in education from Central Michigan University. She taught English and literature, and coached forensics and debate at Nouvel Catholic Central High School in Saginaw, where she was affectionately known as “Old Mother Hubbard.”  Carolyn’s passions in retirement included gardening and quilting. She was an active member of quilting guilds in Cheboygan, Petoskey and Saginaw. She was also a member of St. James Episcopal Church in Cheboygan.

A memorial service will be held at a later date.  In lieu of flowers, memorial contributions may be made to the Dementia Society of America (https://www.dementiasociety.org/donate) in memory of Carolyn Hubbard.

Eric,Amy and families,
I am so sorry to hear about Carolyn. My prayers and thought are with you at this sad time.
Carolyn was a dear friend. We had a lot of good memories together. Our families as well when your Dad was with us as well. Our families have many memories over the years. Please take of yourselves and know I am thinking of you at this difficult time.
Love from Irene

Another cousin gone. Carolyn was a special lady. She haddock many talents. I have many fond memories of good times with both her and Don. Prayers for Amy, Eric and their families. RIP, cousin Carolyn.

I worked with Carolyn at Nouvel. She was just a breath of sunshine everyday. She was passionate about her English classes, her debate teams, forensics. She loved Don and her kids. But those granddaughters won her heart! The birth of each of the girls (Jacqueline, Gabriella Sierra and Zoe) was like the birth of royalty! She was smitten with all her girls. I remember when I peaked in the window during the 8th grade/9th grade dance to see if anyone was dancing. There was Carolyn leading the conga line! It still makes me smile. Many of my holiday decorations, ornaments, tree skirts, quilted bags, easter carrots …were gifted to me by Mrs. Hubbard. I know she is in heaven leading to conga line. Cindy Bialas

I am most grateful for the opportunity to have shared teaching ministry with Carolyn at NCC. She was such an encouraging person for both students and faculty. Her spirit and enthusiasm were contagious. She was a great sidekick who encouraged me in moving forward with so many ideas that would bring school psirit and fun for the students. I am glad we kept in touch after so many years when she departed from NCC. Bless you Carolyn – A Gift to NCC to be remembered.

Carolyn was a very special person. Full of life and always talking about her family. She has been missed by the community at St James. Our condolences to her family. May she Rest In Peace.

I just happen to get online and saw this. We’re so sorry to read of your loss, she was always so gracious to us when she was still on Summertime Court. Please know all of the family is in our thoughts and prayers. Our deepest sympathy.

Condolences to the Hubbard family. We were neighbors in Saginaw on Stone St and I recall Carolyn and Don fondly. Amy and my sister Kerry were close friends at the time. May God see and bless the family in this time of loss.

My sympathies to Amy, Eric and family on the death of your mom. I don’t know if you remember Amy when I tracked you down to find out how to find your mom. I went to school at Arthur Hill with your mom and dad. We were good friends, went to prom together and your mom was in my wedding. When they lived on Stone in Saginaw we still got together. In fact the first year out of high school we went to Bay City Jr. College together. Then your grandpa moved to Mt Pleasant and your mom finished at CMU. When I made contact with you I did write to your mom, but I never heard from her after that. I was saddened to read about her passing and so hoped we could have connected in person. I am going to be sending a card to the funeral home with a note in it. Please let me know when you will have a memorial service as I would like to attend if possible. Again my deepest sympathies.

I enjoyed quilting with Carolyn. I also was lucky enough to visit her in Texas occasionally when our winter travel took us across the country. She will by missed by all of us who were lucky enough to spend time with her along the river! Condolences to her daughter and son and their families.

My condolences to Amy and Eric and their families. Carolyn will be missed by her quilting friends in Patchworkers of Cheboygan. She was a great teacher and friend for all of us. She always spoke lovingly of all her family and shared fun stories of all of you. Heaven is a better place with Carolyn there.