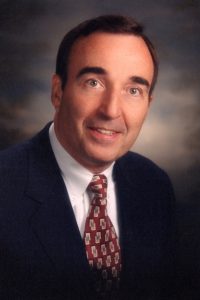 Brian was born on Christmas Day, 1943 to Vernon and Evelyn Howe in Holt, Michigan.  Not expected to live because of a collapsed lung, newborn Brian was whisked his father Vern to a larger hospital, where he thrived.  By all accounts Brian lived a storybook childhood, much loved by his extended family. His shared that magic with all children—nieces and nephews, grandchildren, and others.

Brian attended Holt High School, excelling at football and basketball.  Already a Spartan fan, he enrolled at Michigan State University where he joined Lambda Chi Alpha fraternity.  As a member of Lambda Chi, he put his enthusiasm and charm to good use and made lasting friendships.  He also met his beloved wife, Susan, at MSU.  They were married in 1967.  Brian received his bachelor’s degree and went on to Wayne State University’s Law School.  While in law school, Brian took a position with the National Bank of Detroit, which started his career in trust and estate planning and personal banking.  He honed these skills and shaped the law through his 50-year career at Old Kent Bank, Manufacturer’s Bank, Comerica, and in private practice.  He also served on and led the Michigan Probate Council.  During his long career, he and Susan also raised three children.

Brian loved the outdoors, hiking, fishing, and boating throughout Michigan, especially the Leelanau Peninsula.  He remained a Spartan fanatic and followed his team until the end.

A memorial service for Brian will take place at a later date.

Donations in lieu of flowers may be made to The Leelanau Conservancy, https://www.leelanauconservancy.org/donate/.

Arrangements are by the Estes-Leadley Holt/Delhi Chapel.

So very sorry Karen and family

Dear Karen, Gavin and Katherine,
Our deepest sympathies and prayers go out to you and your families.
Your Dad was one of the most wonderful persons we have ever known.
We loved him and may he rest in peace.
God Bless him and your whole family.
Very sadly, but with our love,
Marie and Tony DeLuca

Dear Karen, Gavin and Katherine,
Very sorry to hear of your Dad’s passing.
Your Dad was one of a kind – entertaining, friendly, considerate.
May he rest in peace. God Bless him and your family.
Clark and Kathy Stevens

I was blessed to have know Brian when he served as a Trust officer for OKB. We were contemporaries. Both admitted to the Bar in 1969. He was a true gentleman. Always a smile, never a harsh word. He always left a positive feeling. May he Rest In Peace. Jim Brady

I was so lucky to get to know Mr. Howe and his family. I have been his mail carrier for the last 3 years and he was always so wonderful. Through tears, laughs and advice I could always count on him to lift my spirits, I will truly miss him and his smile.

My condolences to your family. I have known Brian for over 60 years, as an honest, social, wise and all around great guy. my memories cannot come close to your loss. We will all miss him, but never forget him.

My deepest sympathy to all of the Howe family. He was always a bright legal light in his professional interactions with his clients. My fond memories of working with him will stay with me forever. Rest In Peace.