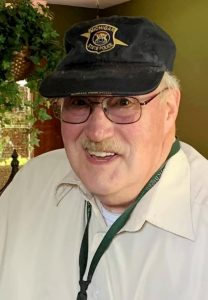 Brian, beloved son, brother, uncle, and friend to many, passed away August 11, 2021. He was born on September 1, 1949. Brian was a kind, thoughtful and Christian man who loved his Lord.

Brian served proudly in the United States Navy, first aboard the Frigate USS VOGE, FF-1047, and then stateside as part of the Submarine Service Training Command. He continued to serve in the Naval Reserve for many years, after completing his active duty service, in a career that included duty assignments in Guam, Hawaii, and many other Naval facilities throughout the United States and around the world. Wherever he was stationed, it was Brian’s practice to get involved in the work of the Military Chaplaincy Corps in that location. He also maintained a lifelong association with the Waikiki Beach Chaplaincy, an organization that provides weekly public worship services on the beach at Waikiki, Hawaii.

He worked for the State of Michigan, Michigan State Police, Fire Marshal division from which he retired early following surviving a closed head injury in 1990. His involvement in the Brain Injury Alliance lasted for years and earned him countless friends who benefited from his mentoring, support, and love as many navigated their own injuries and losses. He is a former president of the BIA chapter in Lansing. He attended South Church in Lansing and loved his church family and his Sunday School classmates whom he talked about frequently.

He is survived by his sister Renee (Beaumont) Wright, nephew and niece Parker Wright and Macey Wright, brother Dr. Dale (Pamela) Beaumont, and nephews Chris Beaumont, Jon Beaumont and Ben Beaumont and their families. Special cousin Larry Crowe was an important friend and confidant to Brian in his later years. He was preceded in death by his loving parents Gloria Beaumont and Robert Beaumont.

The funeral for Brian will be held 11:00 a.m. Tuesday, August 17, 2021, at the Estes-Leadley Greater Lansing Chapel, 325 W. Washtenaw St., Lansing, MI 48933. There will be visitation Monday 4:00–7:00 p.m. as well as Tuesday one hour prior to the funeral all at the funeral home. In lieu of flowers memorial donation may be made to the Capital Area Chapter of the Brain Injury Association, 7305 Grand River Ave., Suite 100, Brighton, MI  48114. Click here to view the Live Stream of the service.

Brian was a kind and Godly man. He was a faithful prayer warrior and will be missed. My condolences to the family.

We absolutely loved Brian. He was a wealth of knowledge and a kind man. My husband and I as well as our granddaughters will miss him terribly. Rest in peace sweet Brian. Love your upstairs neighbors, Hershel, Connie, Zoey and Ava.

Brian was a dearly beloved brother in the Lord. I was encouraged by his faithful attendance at South Church in Lansing. More specifically, he was an active member of New Horizons Adult Bible Community. He will be greatly missed. One of his favorite Bible verses was Titus 2:13. Well Brian, your blessed hope has been realized. God bless you, brother!

Our sincerest condolences to Brian’s family. We met Brian through New Horizons Adult Bible Community at South Church. Brian was a Godly man. My husband Kevin and I had some great conversations with him. He will be missed by all who knew him.

Brian was a wonderful man and a great friend. I will truly miss him

My condolences to Brian’s family. I have been blessed at South Church by his kind and friendly presence and will miss seeing him there.

Wish I had known him Renee, you are a wonderful sister ! He will forever be with you in spirit. Grief is hard to go through.. lean on Jesus and hold onto your Faith . You have a lot of friends here for you !! I Love and am praying for you and your Family

After watching the service I felt like I knew him. I can only imagine what you are going through in missing him. I want you to know that I’m here for you in any way that I can be. Peace be with you.